Berger Appointed Center for the Study of Asia Director 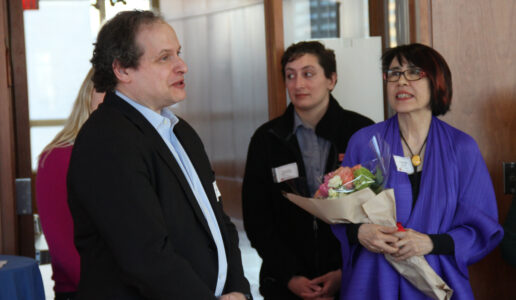 The Center for the Study of Asia (BUCSA), an affiliated regional center of the Frederick S. Pardee School of Global Studies at Boston University, hosted their annual spring reception on April 23, 2018 where Thomas Berger, Pardee School Professor of International Relations, was introduced as the new BUCSA Director.

Pardee School Dean Adil Najam thanked outgoing BUCSA Director Catherine Yeh for her tireless work and leadership of the center over the past three years. Under Yeh’s leadership, BUCSA has promoted comprehensive, interdisciplinary, and cross-national understanding of Asia through coordination of teaching missions, research support, community-building among faculty and students, and broad outreach beyond the university.

Berger, an expert in international relations, comparative government and political culture in East Asia, was introduced as the new BUCSA Director at the reception.

Preceding the reception, BUCSA hosted an exhibition opening entitled Asia at the World’s Fairs: An Online Exhibition of Cultural Exchange.” The symposium featured presentations on the cultural, political, and economic roles of international exhibitions through history, and an exploration of the participating and impact of Asian cultures at these wildly popular and influential events.

The evolving exhibition’s first two “themes” focus on Asian dance and architecture at the fairs, and presenters discussed how the exhibition can serve as an engaging, interactive vehicle for the study of many other themes in the future.

This academic year, BUCSA has also hosted a symposium on yogic traditions in the U.S., and a Diwali celebration entitled “The Art of Light in Asia.”

Berger is the author of War, Guilt and World Politics After World War II,  Cultures of Antimilitarism: National Security in Germany and Japan and is co-editor of Japan in International Politics: The Foreign Policies of an Adaptive State. His articles and essays have appeared in numerous edited volumes and journals, including International Security, Review of International Studies, German Politics and World Affairs Quarterly.