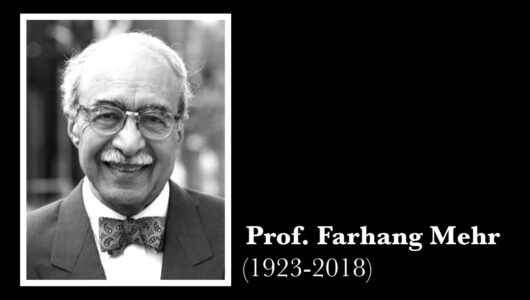 Farhang Mehr, Professor Emeritus at the Frederick S. Pardee School of Global Studies at Boston University, has died. He was 94. Since retirement, he had moved permanently to California, where he died on March 14, 2018.

Dr. Farhang Mehr was a professor of international relations at what is now the Pardee School from 1981 to 1997, teaching courses on the international politics of oil and Iranian history. With law degrees from Tehran University and the London School of Economics and a Ph.D. from the University of Southamption, Mehr made a stellar career in business as well as public affairs in his native Iran. Prior to the revolution in Iran he held high office in the National Iranian Oil Company, in the Ministry of Finance, and led the national insurance company.

Before coming to Boston University, Farhang Mehr had taught at Tehran and National Universities and at the Military Academy in Iran. He was also President of the University of Shiraz in Iran for eight years. He served Iran under Shah Mohammad Reza Pahlavi as Vice-Prime Minister and Acting Finance Minister, and represented Iran on OPEC’s Board of Governors for 5 years.

He was also active in the Zoroastrian community, writing books and giving lectures to acquaint the world with Iran’s oldest religion. He served as the President of the Zoroastrian Anjuman of Tehran for 12 years.

Houchang Chehabi, Professor of International Relations and History at the Pardee School, recalls that “although the revolutionary authorities initially reappointed him in 1979 [as President of the University of Shiraz], he became a victim of later purges and had to go into exile in 1981″ and his “appointment as a professor at Boston University allowed him to reconstitute his life.”

Prof. Mehr leaves behind his wife, Parichehr Naderi, and three children: Mehrdad, Mehran and Mitra. A biography of his life, Triumph Over Discrimination, by Lylah Alphonse, was published in 2000.