CNN’s Peter Bergen Gives Talk on the Future of Terrorism 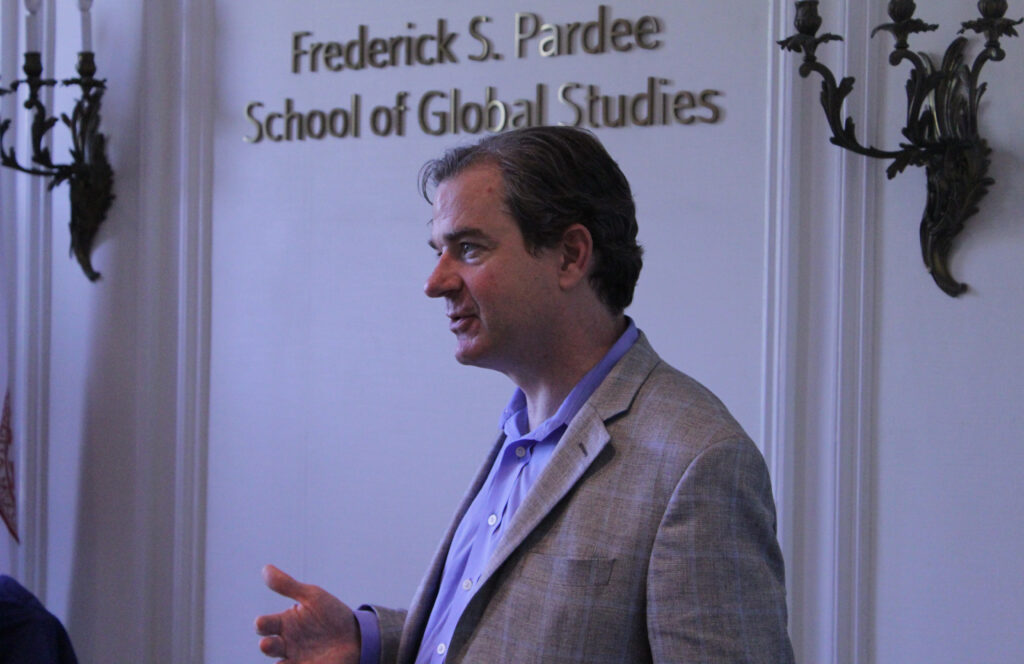 Peter Bergen, National Security Analyst for CNN, spoke at the Frederick S. Pardee School of Global Studies at Boston University on September 25, 2017, on a wide range of topics including the future of terrorism, the current threat posed by terrorist organizations such as ISIS and the latest iteration of the travel ban imposed by United States President Donald Trump. Bergen was hosted by Jessica Stern, Research Professor at the Pardee School.

Bergen, who is also Vice President at the think tank New America, said the primary way in which terrorist organizations are attempting to recruit new members is online.

“What we’re seeing is a largely internet-based radicalization, which by the way is also true for right wing groups, where people are getting radicalized online, meeting other people with similar ideas, but are never meeting in person,” Bergen said. “People fall in love online, and it turns out they also decide to join the jihad online and have been somewhat effective.”

Following Bergen’s talk, Professor of the Practice of International Relations Joseph Wippl moderated a question and answer session between Bergen and Pardee School students and faculty. In response to a student question, Bergen discussed how terrorist organizations such as ISIS have impacted the United States and Europe in different ways.

“We’ve seen 1500 French citizens go to fight with ISIS, the French Foreign Ministry said in July that 271 had returned. Based on the public record, we have found seven Americans who went to fight with ISIS or Al Qaeda in Syria that have returned. They’re all in jail, only one of them planned a terrorist attack — obviously it didn’t happen,” Bergen said. “The volume of Europeans who have gone to fight with ISIS as well as how many have returned is very different than it is in this country. We’re insulated from this, and the Europeans are not — both for reasons of geography, but also ideology.”

Bergen also discussed the most effective ways the United States has combated terrorism since 9/11, arguing that no one approach or preventative measure has proven to be the lone solution.

“I think the American Dream has been the most effective, and that’s been around for a while. It has been an ideological buffer — relatively few Americans have signed up for these kinds of ideas,” Bergen said. “There’s no one thing that we can say has been the magic bullet though. The drone program basically killed most of the leaders of Al Qaeda Central. TSA means that if you’re a terrorist you’re just not going to try and smuggle a weapon on a plane. Each one of these things by itself is not the answer, but the collective strength of all this has prevented attacks.”