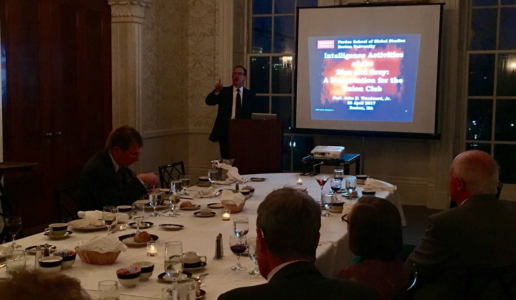 John D. Woodward, Jr., Professor of the Practice of International Relations at the Frederick S. Pardee School of Global Studies, gave a presentation on “Intelligence Activities of the Blue and Gray during the Civil War,” before members of the Military Historical Society of Massachusetts and the Union Club in Boston on April 25, 2017.

In his speech, Woodward focused on three key intelligence areas. First, he discussed, from the Union’s perspective, the situation in Washington D.C. at the outbreak of the war.  In essence, one-quarter of DC’s citizens were pro-Confederacy and the D.C. militias were of suspect loyalty. From the Union perspective, the nation’s capital was riddled with spies.

The U.S. Army Commander, the 74-year old General Winfield Scott, known as “Old Fuss and Feathers” was well aware of these intelligence realities, according to Woodward.

“Scott had a lot to fuss about,” Woodward said. “He was badly handicapped in his attempts to establish a counterintelligence capability because his Quartermaster who would pay the spies was Joseph E. Johnston and his Adjutant General who would handle the administration of the spies was Samuel Cooper, both of whom would soon resign their commissions and become CSA Generals.”

Woodward also discussed the Union’s Bureau of Military Information, established by General Joseph Hooker and headed by Colonel George H. Sharpe.  On the evening of the second night at the critical Battle of Gettysburg, when it was not clear if the Union would stay or retreat, Sharpe gave an intelligence briefing on the status of Confederate forces to Army of the Potomac commander General George Meade and others.

“Sharpe accurately reported that Lee’s only fresh troops were Pickett’s approximately 6,000 soldiers,“ Woodward said. “Sharpe’s intelligence briefing gave assurance to the three generals to stay and fight it out.  When Sharpe concluded his report, General Winfield Scott Hancock exclaimed to Meade, ‘General, we have got them nicked.’”

Third, as an element of international intrigue, Woodward discussed “the secret mission assigned by the Confederate leadership to Captain James Dunwody — to procure clandestinely ships of war from thousands of miles away and arm, equip, and man them to fight for the Confederate cause.”

Summarizing, Woodward noted that “Both North and South ran sophisticated intelligence operations and networks which had a profound impact on the Civil War’s outcome.”