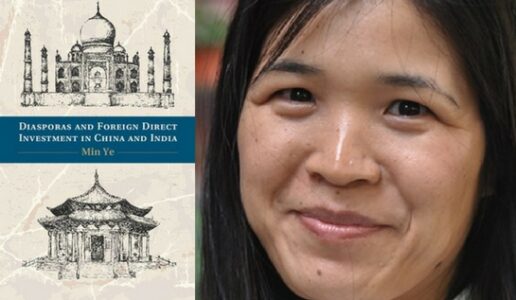 Min Ye, Associate Professor of International Relations and Academic Coordinator of the Asian Studies Program, recently had her book, Diasporas and Foreign Direct Investment in China and India reviewed in the journal The China Quarterly.

The review was published in the June 2016 edition of The China Quarterly.

From the text of the review:

For all the differences between China’s and India’s economic ascents in recent decades,
one of the most striking is their differing approaches to foreign direct investment
(FDI). Whereas China has relied heavily on FDI, India’s opening has been considerably
more gradual and more limited. This refreshing new book explains why.

While many political scientists would focus on China’s and India’s contrasting political
systems, Min Ye takes a different approach. The key difference, in her view, lies
in the two countries’ relations with their diasporas.More precisely, it lies in the nature
of Chinese and Indian policymakers’ ties with diasporic entrepreneurs and how these
compare with ties to indigenous businesses. In China, the process of opening was
powerfully supported by diaspora entrepreneurs in Hong Kong, Macau, Taiwan
and Southeast Asia, who not only had substantial capital to invest but also intimate
ties with Chinese officials at both the national and local levels. The Indian diaspora,
in contrast, has struggled to support India’s opening in the same way. They have
faced less favourable geography, had less capital to lavish on their home country,
and have lacked connections to local officials. As a result, India’s diaspora entrepreneurs
have had far more trouble overcoming resistance to FDI from domestic
businesses.

You can read the entire review here.

Ye was the director of East Asian Studies program from 2010-2014 and led the proposal for the Asian Studies major at Boston University. She currently serves as the academic coordinator of the Asian Studies major. She also served as a visiting scholar at Fudan University, Zhejiang University, and Chinese Academy of Social Sciences in China, as well as Rajiv Gandhi Foundation in India, Chinese University of Hong Kong, and the National University of Singapore. In addition, she was a consultant on globalization for Chinese state-owned companies and private companies. You can learn more about her here.