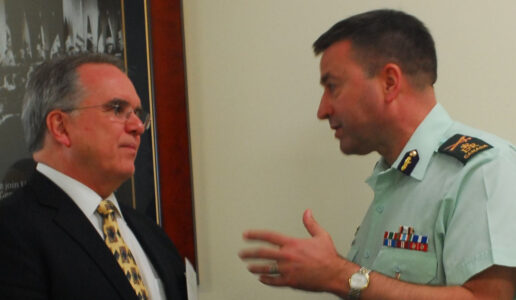 James C. Wallace, Lecturer in International Relations at the Frederick S. Pardee School of Global Studies, was a keynote speaker at the Canadian Armed Forces Annual Chaplains Conference held at the NAV Centre training grounds in Cornwall. Ontario from May 29 through May 30, 2016.

The combined forces training event was led and hosted by Brigadier General Guy Chapdelaine, and was attended by over 300 active and reserve duty officers including the academic leaders and faculty of the Royal Canadian Military College, the Canadian Forces Chaplains School and the Canadian Forces College.

Wallace’s keynote speech was entitled “Religion in Conflict Zones: A New-Old Challenge for 21st Century Warfare,” and focused on the emerging area of religious advisement in battlefield operations which involves dealing with religio-cultural variables on the battlefield with kinetic and peace-keeping operations.

According to Wallace, religious advisement is an emerging battlefield necessity for commanders as increasingly deployments are being made into areas of the Middle East, Africa and Asia that have a high religious component in the belief systems of the people at large. The push for developing this skill is not coming from the chaplaincy corps, but from combat commanders who have faced this reality from the Balkans to Afghanistan to Iraq and Syria to Africa – and felt un-equipped to deal with it.

The Canadian Armed Forces has been actively pursuing developing capabilities in this area – from the Chief of Defense Staff to the Armed Forces Council, and Wallace has been working with these senior leaders and general staff of the CAF in developing these capabilities for more than two years.