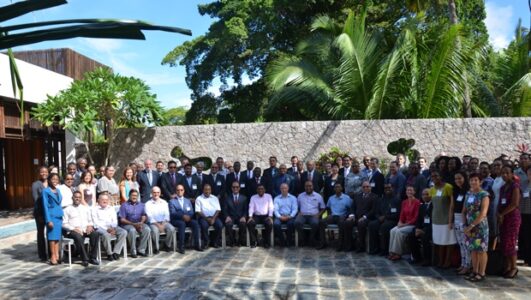 Key policymakers from small states gathered in the Seychelles for the 4th Biennial Conference on Small States.

Dean Adil Najam of the Frederick S. Pardee School of Global Studies at Boston Univeristy was asked to present a keynote address on ‘What Climate Change Means to Small States’ at the 4th Biennial Conference of Small States organized by the Commonwealth of Nations, held in Seychelles on May 12-13, 2016.

Under the theme of “Achieving a Resilient Future for Small States,” the 4th Global Biennial Conference on Small States brought together leaders and senior policymakers from Commonwealth and non-Commonwealth small states, as well as key regional and international development partners. The conference in Seychelles was called to take stock of the challenges small states face, consider their strategic vision for the future, and review some of the tools required to achieve their goals.

Addressing the gathering of leaders from small states, many of them from small island states that are the countries most threatened by sea level rise, Dr. Najam suggested that we are already living in the “age of adaptation.” This, he said, means that we have already “missed the boat on mitigation,” he said. He called on participants to come up with a strong small states climate strategy because they, more than most other countries, face an existential threat due to climate change.

“Unless there is someone beating the drum and saying to the international community ‘you committed to 1.5 degrees, you promised $10 billion in investments, now live up to your commitments,’ those commitments will soon be forgotten. You [the small states] are the countries that have the most to lose here, and you are the ones that have the most legitimacy to shake the big countries’ conscience.”

Dr. Najam suggested that a strong strategy should focus on the Paris climate change agreement and its three key provisions: (a) that the goal should be to restrict global climate change to below 1.5 degrees Celsius, (b) that the additionality of $10 billion in new investments must be met, and (c) the issue of ‘loss and damage’ in affected countries must be tackled as a priority.