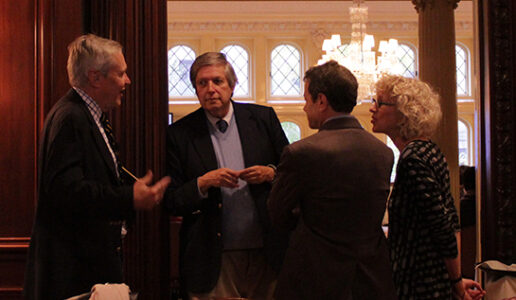 Erik Goldstein, Professor of International Relations and History at the Boston University Frederick S. Pardee School of Global Studies, attended his final meeting of the Board of Governors of the International Baccalaureate (IB) in April 2016. Prof. Goldstein, who served as the Chair of the Boston Univeristy Department of International Relations for 12 year and is a Fellow of the Royal Historical Society (Great Britain), has been a member of the IB board since 2010.

Founded in 1968, the International Baccalaureate Organization currently works with 3,765 schools in 147 countries to develop and offer four challenging programs to over 1,178,000 students aged 3 to 19 years. Its mission is to develop inquiring, knowledgeable and caring young people who help to create a better and more peaceful world through intercultural understanding and respect.

To this end the IB works with schools, governments and international organizations to develop challenging programs of international education and rigorous assessment. These programs encourage students across the world to become active, compassionate and lifelong learners who understand that other people, with their differences, can also be right.

Erik Goldstein served as chair of the IR Department for 12 years, from 1998 to 2010. His research interests include diplomacy, formulation of national diplomatic strategies, the origins and resolution of armed conflict, and negotiation. Goldstein is a Fellow of the Royal Historical Society (of Britain) and a member of the Advisory Board of the Center for Global Change and Governance, Rutgers University, having previously served as a member of the Advisory Board of the Centre for the Study of Diplomacy at the University of Leicester (UK).  In 2010 he was elected to the Governing Board of the International Baccalaureate. You can read more about him here.