Najam OpEd in The Guardian: Testing the Climate Deal 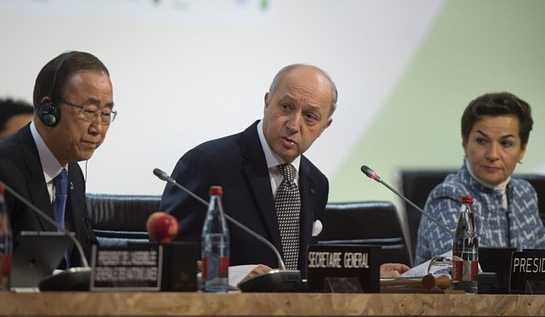 Adil Najam, Dean of the Frederick S. Pardee School of Global Studies at Boston University, said that there is a way to determine whether the results of the ongoing 2015 UN Climate Change Conference (COP21) will make a positive difference.

Najam, who attended the opening of the Paris negotiations, made the argument in a Dec. 7 Op-Ed in The Guardian entitled “10 Tests to Find Out if Paris’ Climate Deal is a Success.”

Ministers are back in Paris for the final stretch of COP 21 negotiations. A draft is in hand, peppered with the brackets that indicate areas of disagreement. France’s foreign minister, Laurent Fabius, is busy constructing coalitions. The process of paring down the brackets has begun in earnest.

It is not clear what the agreement will be, but it is clear that there will be an agreement. That means Paris can be declared a success.

Of course, Paris was condemned to succeed. The ignominy that was Copenhagen (COP15, 2009) was never to be its destiny. That meant getting to an agreement – any agreement. Now that such an agreement is in sight, there is a palpable sigh of relief.

Now is a good time to ask just how meaningful (or not) any given Paris agreement will be. Here are 10 questions I will be using as a yardstick. They will be my guide to exactly what we are celebrating, and how much we should celebrate.

Najam also wrote about the climate conference in the Pakistan media outlet The News on Dec. 9. You can read the entire article here.