Najam OpEd Calls for a Woman on the Pakistan Supreme Court 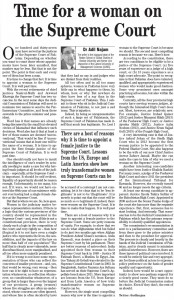 Dean Adil Najam of the Frederick S. Pardee School of Global Studies at Boston University reminds us that “one hundred and thirty-seven men have served as the justices of the Supreme Court of Pakistan,” but no women ever has. He believes it is time to change that. “It is well past time,” he says.

In a strongly worded Op-Ed published Sept. 25 in Pakistan’s largest English newspaper, The News International, titled “Time for a Woman on the Supreme Court,” Dean Adil Najam makes a passionate case for doing so. Some excerpts:

All too often and in all too many spheres, women in Pakistan have very little say in what happens to them, by whom, how, or why. But nowhere do they have less of a say than in the Supreme Court of Pakistan. This, I submit to those who sit in the Judicial Commission of Pakistan, is not just a sad irony. This is injustice.

Indeed, by being so unrepresentative of such a large set of Pakistanis, the Supreme Court of Pakistan has made itself that much less legitimate. No. Lest I be accused of a contempt I am not committing, let it be clear that to be ‘less legitimate’ is not to be ‘illegitimate’. It is merely to point out that the court will be so much more legitimate if, indeed, there were women on the Supreme Court. It is time to make that happen. It is well past time.

The Op-Ed goes on to explain the constitutional requirements for appointments to the Supreme Court and provides examples of a number of eminent Pakistani female lawyers and judges who would ably qualify for such an appointment.

The full Op-Ed can be read here.

Adil Najam is the Inaugural Dean of the Pardee School of Global Studies at Boston University and former Vice Chancellor of the Lahore University of Management Sciences in Pakistan. Read his full profile here.