Former President of Latvia Speaks on the Future of Europe 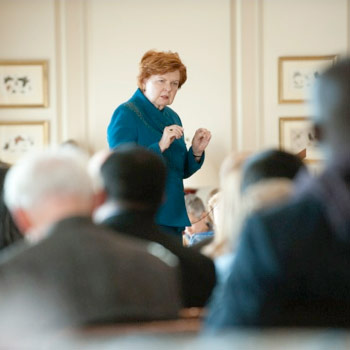 Delivering the first lecture in the Inaugural Year Lecture Series at the Boston Univeristy Frederick S. Pardee School of Global Studies, Dr. Vaira Vike-Freiberga, the former President of Latvia (1999-2007), took a hard-hitting look at the past trajectory, current situation and future challenges faced by Europe and the European Union (EU). She argued that the so-called ‘European Project’ has been one of the great marvels of modern history, but serious questions have arisen as the EU wavers on clearly signaling what its ‘neighborhood’ and ‘community’ is and what responsibilities it holds in this ‘neighborhood’ and ‘community.’

Former President Vike-Freiberga traced the history of the “European project” and explained how it built on its own success and grew gradually but steadily into this century. However, she argued, the recent financial crisis has had very deep and severe impacts on the economies of Europe, and especially its smallest economies. At the same time an assertive Russia has now emerged as a major challenge to the very idea of Europe as it has emerged in the last quarter century. This, she suggested, has raised new questions for Europe and the future of EU. Her view was that the EU has been overly cautious in its approach till now but will have to take some very tough political and economic decisions, and fairly soon.

The lecture on “What does the future hold for Europe and the EU?” (October 6, 2014) was the first event in the series of lectures to mark the launch of the Boston University Frederick S. Pardee School of Global Studies. A series of Inaugural Year Lectures are planned on themes and issues central to the mission and focus of Boston University’s newest School. Prof. Adil Najam, the Inaugural Dean of the BU Pardee School introduced the series and the School at the beginning of the event.  This was followed by the lecture by Dr. Vaira Vike-Freiberga and then a discussion moderated by Prof. Vivien Schmidt of the BU Pardee School of Global Studies, Jean Monnet Professor of European Integration, and the Director of the Center for the Study of Europe. 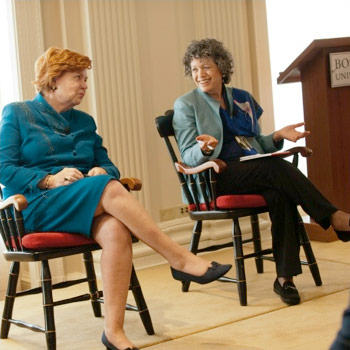 A standing room only audience of BU students, faculty and guests from around Boston, including Boston’s diplomatic corps, were present at the event and also asked questions of the speaker. The event ended with a musical performance (violin) by Aija Reke, a Latvian student at Boston University’s College of Fine Arts, a past winner of the BU Solo Bach Competition and a concertmaster of the BU Symphony Orchestra. The event was co-hosted by the Pardee School of Global Studies and the Center for the Study of Europe.

President of Latvia from 1999-2007, Dr. Vike-Freiberga was instrumental in achieving Latvia’s membership in the European Union and NATO. Later, she was Special Envoy and since 2007, she has been active in various international organizations related to international affairs, social issues, moral values, and democracy. She was Vice-Chair of the Reflection group on the long term future of Europe,  chaired the High-level group on freedom and pluralism of media in the EU, and is President of the World Leadership Alliance Club of Madrid. She also serves as a member of the Boston Global Forum’s Board of Thinkers.

Having left Latvia as a child refugee to Germany in 1945, then French Morocco and Canada, she earned a Ph.D. in psychology (1965) at McGill University. After a distinguished career as Professor at the University of Montreal, she returned to her native country in 1998 to head the Latvian Institute. A year later she was elected president by the Latvian Parliament and re-elected in 2003.