Working Group on Development and Environment in the Americas 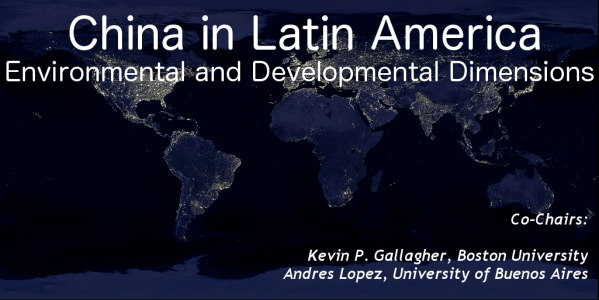 The working group will be  comprised of the following persons:

Kevin P. Gallagher – Email – Kevin is Director of the Global Economic Governance Initiative at Boston University and professor in the  Department of International Relations.  He is the co-author of The Dragon in the Room: China and the Future of Latin American  Industrialization and co-editor of Rethinking Foreign Investment for Sustainable Development: Lessons from Latin America.  He is a member of  the China-Latin America Working Group at the Inter-American Dialogue and has served as an advisor to the US Department of State, the US  Environmental Protection Agency, and the United Nations Conference on Trade and Development.

Rebecca Ray – Email – Rebecca is a PhD student in Economics at the University of Massachusetts, Amherst. She holds an MA in International  Development from the George Washington University Elliott School of International Affairs in Washington, DC, and a BA in International  Studies  and Sociology and Anthropology from Guilford College in Greensboro, NC. Prior to her studies at the University of Massachusetts, she  was Research Associate at the Center for Economic and Policy Research in Washington, DC. Her academic fieldwork has included collaboration  with the Partnership for Food Industry Development in Managaua, Nicaragua and the Institute for Sustainability Education and Action on Salt  Spring Island, BC, Canada. She is author of several studies on comparative economic and development policy and social outcomes, particularly Latin America.

Daniela Ramos – Email – Daniela has a master’s degree in Economics from the Instituto Torcuato Di Tella and a Degree in Economics from the Universidad de Buenos Aires (UBA). She is principal researcher at the Centro de Investigaciones para la Transformación (CENIT) and Professor at the University of Buenos Aires. She has been consultant for different international organizations such as PNUD, ECLAC, IADB and IDRC. She is author of several studies on foreign investment, entrepreneurship and trade in goods and services.

Julian Donaubauer – Email – Julian is a researcher and PhD candidate at the Chair for Growth Theory and Business Cycles at the Helmut-  Schmidt-University in Hamburg. His research interests are in the fields of International and Development Economics with a focus on Latin  America. He was a visiting researcher at the Institute for the World Economy in Kiel as well as the Centro de Investigaciones para la  Transformación (CENIT) in Buenos Aires. Prior to his doctoral studies he worked for more than two years as research assistant at the Chamber of  Industry and Commerce in Berlin. Julian holds a diploma from the University of Passau and studied abroad at the Universidad de Málaga.

Adam Rua Quiroga – Email – Adam is a Bolivian economist, holding a Master Degree in Economics from ILADES – Chile (Georgetown University). He is specialized in Macroeconomics and Environmental Economics issues. He has develop research in these areas with public research institutions in Bolivia, like Universidad Mayor de San Simon; but also with NGOs like FAUNAGUA working with European funding.   The most relevant research is related with environmental impact assessment, environmental economic valuation and environmental regulation in developing countries.

Alejandra Saravia López – Email – Alejandra is a Researcher and Professor in the Faculty of Economics at the Universidad Mayor de San Simon-Cochabamba, where she is a researcher at the Instituto de Estudios Sociales y Económicos.  Her research focuses on the environment-poverty relationship, and international trade and environmental deterioration. She has recently published work on the natural resource curse and its impact on poverty and the environment in Bolivia, and on the relationship between inequality and environmental degradation across Latin America.

Philip Fearnside – Email – Philip is a Research Professor in the Department of Ecology at the National Institute for Research in the Amazon (INPA) in Manaus, Amazonas, Brazil.  He is a permanent resident in Brazil where he has lived in Amazonia for 37 years doing ecological research. He also has field experience in India, Indonesia and China. He completed his Ph.D. in 1978 in the Department of Ecology and Evolutionary Biology, Division of Biological Sciences, University of Michigan, Ann Arbor, Michigan, U.S.A.  Fearnside’s research since 1974 has been directed at the estimation of human carrying capacity of tropical agro-ecosystems. His work since 1992 has been organized around the objective of converting the environmental services of Amazonian forests into a basis for sustainable development for the rural population of the region, taking the place of the current pattern of forest destruction.

Nicola Borregaard – Email – Nicola is currently Head of Energy and Climate Change at Fundación Chile. She is the Former Executive Director of CIPMA, Centro de Investigación y Planificación del Medio Ambiente, and Co-Founder and Director of RIDES NGO. Between 2005-2008 she was Director of the National Energy Efficiency Program of the Chilean Government. Her experience includes working as Advisor to different Ministers of Economy and Energy, work for the Chilean National Commission on Environment, and consultancy work (national and international) on topics related to energy, environment, and social responsibility. Borregaard is a member of the Government´s Advisory Commission on the Electricity Future, as well as of the Presidential Commission on Urban Planning, and a member of the National Advisory Council of the Ministry of Environment.

Annie Dufey – Email – Annie holds a degree in economics from Universidad de Chile and an MA in Environment and Development Policies from University of Sussex. Since February 2009 she is Director of Development and Studies at the Energy and Climate Change Area of Fundación Chile. Before joining Fundación Chile she was Senior Researcher at the Environmental Economics Programme of the International Institute for Environment and Development (IIED) in London. She is also Coordinator of the Platform Energy Scenarios Chile 2030 and consultant to several multilateral organizations such as OECD, UNCTAD, ECLAC, DFID and IDB.

Cristóbal Muñoz is Project Manager at Fundación Chile. He holds a BSc and MSc in Industrial Engineering from the Pontificia Universidad Católica de Chile. He also is on the technical committee of Energetic Scenarios 2030, a platform that aims to discuss about different visions of the Chilean energy matrix. He has experience in the electrical sector, developing in distribution and generation firms, and as a consultant in climate change mitigation strategies. His interests are: electrical systems planning, renewable energy, electrical markets development and regulation schemes.

Guillermo Rudas – Email – Guillermo is a Professor in Environmental Economics at the Javeriana and Externado Universities of Colombia.  He is a researcher in monitoring and evaluation of environmental and social policy, particularly application of economic and financial instruments to environmental policy. During the 1990s, Guillermo contributed, via his post at the Ministry of Environment, to use of economic instruments in environmental regulation in Colombia and in the last 15 years, he has continued to contribute to their implementation, as adviser to a number of different institutions – both regulators and regulated.  He was Titular Professor at the Department of Economics at the  Universidad Javeriana, where he taught and carried out research for more than 25 years. He is author inter alia of a book on economics and environment (Economía y Ambiente) as well as other essays published in national and international journals.

Adam Chimienti – Email – Adam Chimienti is a PhD candidate at the Institute of China Asia Pacific Studies at National Sun Yat-sen University in Taiwan. He received his M.A. in International Relations from St. John’s University and B.A. in History and Sociology from Queens College (CUNY). Currently based in Ecuador for his fieldwork, his research interests center on Chinese-Ecuadorian relations, and the environmental and social issues stemming from major extractive projects throughout the Andean region. He is the author of several articles on Chinese foreign investment and contemporary issues in Latin America.

Claudia Schatan – Email – Claudia is a Mexican economist, at present a Visiting Scholar at the Economics Department of Universidad  Iberoamericana, Mexico City. From 1990-2011 she worked at the Economics Commission for Latin America and the Caribbean (ECLAC) in  Mexico, where she was the Head of the International Trade and Industry Unit over the last 10 years. During 1980-1989 she was a researcher  and  professor at the Economics Department of the Centro de Investigación y Docencia Económica (CIDE), Mexico City.  Her research has  focused on  competition, trade, industry and environment. Among other publications, she co-authored a groundbreaking book  titled Maquiladoras and the Environment in Mexico.

Cynthia Sanborn – Email – Cynthia is the Director of the Research Center at the Universidad del Pacífico (CIUP) and Professor of Political Science at the same university.  She has held the William Henry Bloomberg Visiting Chair at Harvard University, where she was also Director of the Program on Philanthropy, Civil Society and Social Change in Latin America (PASCA).   She has been a staff member and consultant for various foundations and development agencies.   Dr. Sanborn has written and edited articles and books on issues related to Peruvian and international politics, civil society and development, and corporate social responsibility, with emphasis on the extractive industries.   Since 2007, she has been a member of the national Working Group of the Extractive Industries Transparency Initiative (EITI) in Peru, representing the university sector.  Dr. Sanborn received her PhD and MA in Government from Harvard University and a BA in Political Science from the University of Chicago.   She is a citizen of the United States and permanent resident of Peru.

Victoria Chonn Ching – Email – Victoria is a researcher at CIUP and Assistant to the Director of the Peru-China Center at UP.  She has  interned at the National Committee on U.S.-China Relations in New York, and has provided research assistance to different public sector  agencies.  She has a M.A. in Chinese Studies and a B.A. in Political Science and Asian Languages and Civilizations from the University of  Michigan.

Edward Cunningham – Email – Edward is an Assistant Professor in Boston University’s Department of Geography and Environment and the Director of the Harvard Kennedy School Asia Energy and Sustainability Initiative.  He is also a research affiliate of the Massachusetts Institute of Technology (M.I.T.) Industrial Performance Center and serves as a consultant to private and publicly listed companies, with a particular focus on the energy and financial sectors.  His clients range from startups in energy storage and wind power to established majors in coal gasification and unconventional oil and gas exploration. Prof. Cunningham received a B.S. from Georgetown University, an A.M. from Harvard University, and his Ph.D. from M.I.T. He was selected as a Fulbright Fellow to China, during which time he conducted his doctoral fieldwork as a visiting fellow at Tsinghua University. He is fluent in Mandarin and Italian, and focuses his academic work on energy markets, energy policy, and the political economy of development.