On Wednesday, June 20, the Frederick S. Pardee Center for the Study of the Longer-Range Future hosted a seminar with Muhammad H. Zaman, a Professor of Biomedical Engineering and a Pardee Center Faculty Associate, where he discussed his recent book, Bitter Pills: The Global War on Counterfeit Drugs.

The book, published by Oxford University Press in April 2018, provides an in-depth account of the increasingly common problem of counterfeit pills found around the world resulting from the rise of Internet commerce, along with globalization and increasing pharmaceutical use. 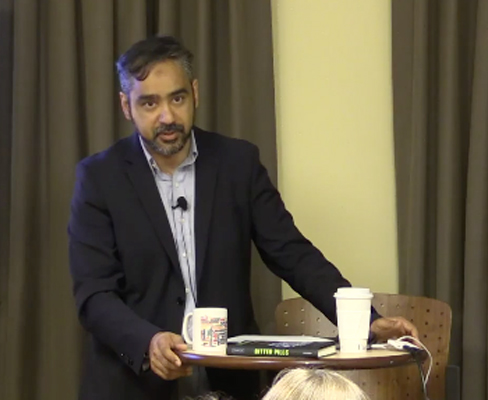 At the seminar, Prof. Zaman began by acknowledging the difficulty in estimating the scale of the counterfeit drug problem due to a lack of awareness and understanding of the issue, limited use of autopsies in developing countries, and difficulties in identifying the impact of counterfeit drugs when used by people with illnesses in which effective doses of medicine may vary. Still, the best estimates based on models and projections indicate that as many as 100,000 to 1 million people die each year from counterfeit drugs.

Prof. Zaman also noted that the problem is not new, nor is it limited to particular regions, citing several examples from around the world and dating back to ancient times. He emphasized the clear need for new technology that is affordable and easy to use, as the current cost to test a single tablet is often between $100 to $200.

He explored the complexity of the problem and stressed the need to develop trust between all of the actors involved, including doctors and pharmacists, consumers, governments, and pharmaceutical companies. He also spoke about the possibility of learning from other industries, citing the top-down approach of the aviation industry’s strict penalties to keep poor quality parts from entering the market, as well as the bottom-up approach of restricting the ivory trade in China by raising public awareness.

Prof. Zaman’s presentation was followed by a wide-ranging discussion with the audience. Watch the full seminar in the video above. Click here to read more and to purchase the book.

Following the seminar, Prof. Zaman participated in a lunch discussion with the Pardee Center’s Graduate Summer Fellows, where he discussed his career path, his other current research interests — including antimicrobial resistance and refugee health and well-being — and the importance of engaging and communicating with policymakers and the public about science, engineering, and public health.

Livestream: “Coronavirus and the Future of Infectious Disease”