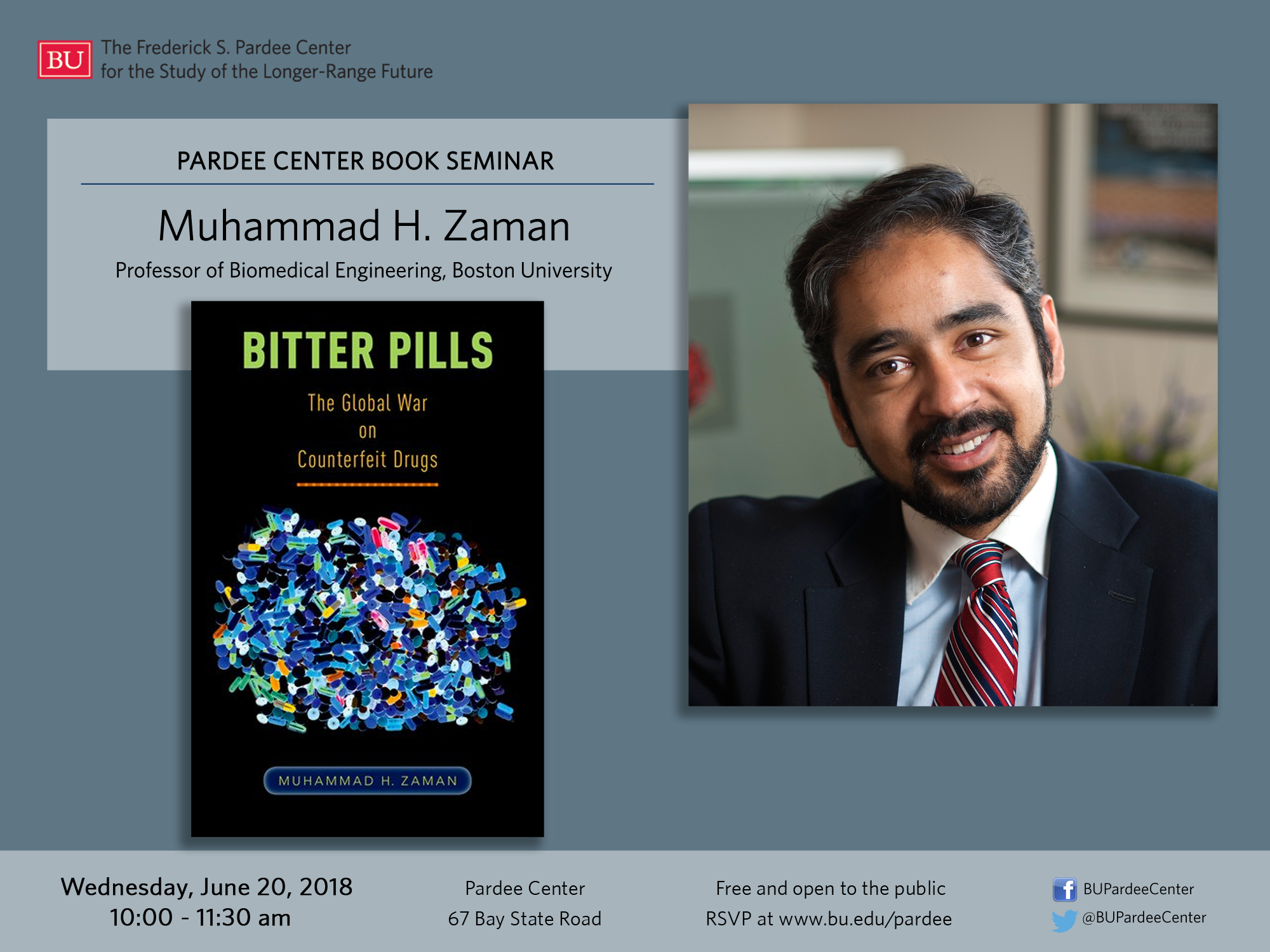 The Frederick S. Pardee Center for the Study of the Longer-Range Future invites you to attend an upcoming seminar with Muhammad H. Zaman, a Professor of Biomedical Engineering and a Pardee Center Faculty Associate, where he will discuss his recent book, Bitter Pills: The Global War on Counterfeit Drugs. The seminar will take place on Wednesday, June 20 from 10:00 – 11:30 am at the Pardee Center at 67 Bay State Road.

The book, published by Oxford University Press in April 2018, provides a journalistic account of the increasingly common problem of counterfeit pills — which have long been an issue in developing countries — in the United States drug supply, resulting from the rise of Internet commerce, along with globalization and increasing pharmaceutical use. In the book, Prof. Zaman aims to raise awareness about counterfeit drugs and examine possible solutions to help people protect themselves. He focuses on the science and engineering behind both counterfeit and legitimate drugs, and explores the potential of a “technological fix” for the counterfeit drug problem.

Muhammad H. Zaman is Howard Hughes Medical Institute Professor of Biomedical Engineering and International Health at Boston University. Prof. Zaman’s current research is focused on three areas namely using quantitative tools to understand tumor metastasis, developing robust technologies for high-value healthcare problems in the developing world, particularly in the area of maternal and child health and working on health and innovation policy issues in developing nations. Technologies developed by Prof. Zaman are in various stages of implementation in several countries. In 2013, Scientific American named a technology from Zaman lab, PharmaChk, among the 10 technologies that will change the world.

He has won numerous awards for his research and teaching from IEEE, FEBS, American Society for Engineering Education, USAID, The US National Academy of Sciences, The University of Texas System, Boston University and other national and international organizations. Most recently, he was named Howard Hughes Professor by the Howard Hughes Medical Institute and was elected as a Fellow of American Institute of Biological and Medical Engineering.

In addition to his research, Prof. Zaman is actively engaged in bringing quality engineering education in several developing nations. He is currently involved in setting up biomedical engineering departments at universities in Kenya, Zambia, Uganda and Ethiopia. He is co-Director of the UN Africa Biomedical Initiative. He is a regular contributor on issues of drug quality control and global health for the Project Syndicate (his columns have appeared in newspapers in more than 20 countries), Huffington Post and writes a weekly column on innovation in health and education for leading Pakistan daily, Express Tribune which is part of the International New York Times group.