First general secretary of the World Council of Churches (WCC) 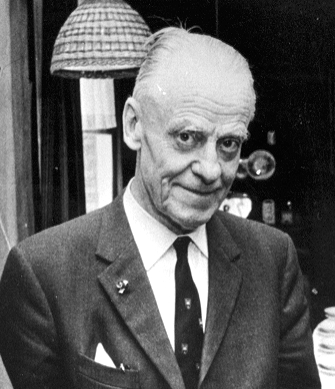 Visser ‘t Hooft was born in Haarlem, Neterlands, and graduated from the University of Leiden. During his student days he was drawn into the Student Christian movement (SCM), where he learned for the first time that Christian faith could be a dynamic reality. A meeting with John R. Mott kindled his vision of the worldwide mission of Christ, which shaped all his subsequent work. Reading Karl Barth’s Epistle to the Romans in 1922 gave him the assurance that the word of God had an authority that could challenge all the ideologies of modernity. There was a message to match the mission.

In 1924 Visser ‘t Hooft moved to Geneva to head the international work of the YMCA among boys, an assignment that nurtured his wide knowledge of an sensitivity to international issues. From 1932 he was general secretary to the World’s Student Christian Federation (WSCF), and from 1938 he was the first general secretary of the WCC “in process of formation.” He retired from the WCC in 1966.

The focus of Visser ‘t Hooft’s passion can be seen in the titles of some of his books: None Other Gods (1937), The Kingship of Christ (1948), and No Other Name (1963). The churches of Europe were hindered from their world mission by unlawful alliances with nationalism and with liberal ideologies. In this syncretistic entanglement, he believed, they could not meet the onslaught of the new paganisms. The absolute authority of Christ as God’s living word required both unity and mission, for how could the Good Shepherd gather all the nations if is own flock was scattered? The world mission of the church must be at the heart of ecclesial life, not relegated to peripheral bodies.

Visser ‘t Hooft was not a major theological writer, but his work in the WSCF and in the WCC, his ceaseless traveling, speaking, and writing, and during World War II his often dangerous work of keeping Christians on opposite sides in contact with one another were of decisive importance in shaping the ecumenical movement of the twentieth century.

Visser ‘t Hooft, Willem A. and J. H. Oldham. The Church and its Function in Society. London: George Allen & Unwin, 1937.

Visser ‘t Hooft’s papers are in the WCC archives in Geneva and include a list of over 1.760 items—books, articles, and unpublished papers.

_____. The Kingship of Christ; an Interpretation of Recent European Theology. New York: Harper, 1948.

_____. No Other Name London: The Choice Between Syncretism and Christian Universalism. London: SCM Press, 1963.

Gérard, François C. The Future of the Church: The Theology of Renewal of Willem Adolf Visser’t Hooft. Pittsburgh: Pickwick Press, 1974.

László, Gonda. The Service of Evangelism, the Evangelism of Service: The Influence of John R. Mott, Hendrik Kraemer, Willem A. Visser ‘t Hooft and Johannes C. Hoekendijk on the Development of the Understanding of Mission in the Reformed Church in Hungary, 1910-1968. Zoetermeer: Boekencentrum, 2008.

Chronology of the Life of Willem Visser ‘t Hooft.