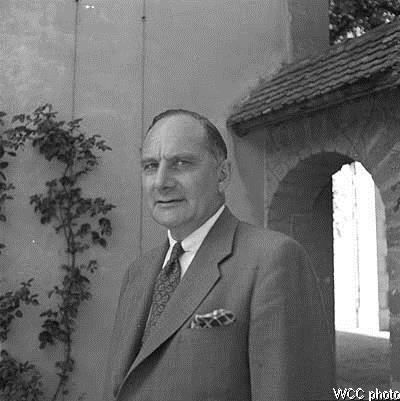 Henry Pitney (“Pit”) Van Dusen was born in 1897, the son of Philadelphia lawyer George P. Van Dusen and Katherine J. Pitney. He originally intended to follow his father into law, but became deeply involved in the YMCA and student Christian activities as an undergraduate at Princeton where he got his A.B. in 1919. After receiving his B.D. from Union Theological Seminary in 1924, he overcame a challenge to his ordination by the conservative judicial commission of the Presbyterian General Assembly when he would not affirm a literal belief in the virgin birth. He joined the faculty of Union Theological in 1926, leaving only long enough to get his Ph.D. from Edinburgh University in 1932. He was appointed president of UTS in 1945 and served until his retirement in 1963.

Van Dusen was a leader of a new generation of ecumenists formed by the searing experience of World War I which bred in them a wholesale rejection of the prewar optimism of liberal Protestantism and a passion to abolish war. In 1933, he organized a seminar for younger theologians–the Theological Discussion Group—that included such members as Reinhold and Richard Niebuhr and Paul Tillich, and met twice a year to examine what Christianity had to say to the issues created by the contemporary situation. The problem, as they defined it, was human sin and nationalism. As one of the foremost Christian internationalists, Van Dusen believed that the good of the entire world came before the good of any one nation. He tried, in his organizational work, to advance that cause.

Van Dusen thought that what the church, as a transcendent organization, had to offer was a place where all people could see that they are kin, regardless of race, class, or gender. As such, they could function as what they called, “a nucleus for world community.” In support of that vision, they then helped create the World Council of Churches and build the political support for the creation of the United Nations in 1948.

Van Dusen brought this vision and his passion for ecumenism into his leadership of Union Theological Seminary where as president he made it part of the curriculum, sought and won the funding for two endowed chairs in ecumenism, and built an ecumenics archival collection as part of the library system. His leadership in the ecumenical movement was nationally recognized when his portrait graced the cover of Time magazine at the time of the second assembly of the World Council of Churches in Evanston, IL in 1954.

Van Dusen, who had suffered a serious stroke in 1970, and his wife, Elizabeth, who was increasingly unwell, carried out a suicide pact in January 1975 by taking an overdose of sleeping pills. She died immediately. He died two weeks later of a heart attack.

Archival holdings. Van Dusen’s papers are held by the Union Theological Seminary Archives. More information can be found at http://www.columbia.edu/cu/lweb/indiv/burke/archives/uts.html.

_____. For the Healing of the Nations: Impressions of Christianity around the World. New York: Friendship Press, 1940.

_____. Methodism’s World Mission; The Report of a Non-Methodist. New York: Joint Division of Education and Cultivation, Board of Missions and Church Extension, the Methodist Church, 1940.

_____. Spirit, Son, and Father: Christian Faith in the Light of the Holy Spirit. Lectures on the James A. Gray Fund of the Divinity School of Duke University, Durham, North Carolina. New York: Scribner, 1958.

From World Council of Churches Archive