Bishop of the African Methodist Episcopal Church, author, editor, human rights advocate and fervent proponent of the “Back to Africa” movement 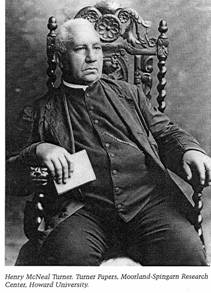 Freeborn in South Carolina, Turner was a gifted speaker, largely self-educated. In 1848 he joined the Methodist Episcopal Church South and five years later was licensed as a lay exhorter to travel throughout the South preaching and evangelizing. In 1858 he joined the African Methodist Episcopal (AME) Church and the following year was assigned to the AME mission in Baltimore, which enabled him to enroll in Trinity College for divinity study, his first formal education. He was ordained a deacon in 1860 and an elder two years later. During the Civil War he helped recruit blacks as Union troops and was commissioned the first black army chaplain. Following the war he was sent to Georgia as a member of the reconstruction forces, but he resigned to recruit members for the AME Church in that state. He held a series of political offices in Georgia and in 1876 became director of the AME publishing house in Philadelphia. Four years later he was elected bishop in Georgia.

Turner regarded slavery as a part of the divine plan to bring Africans to America in order for them, in his words, to “come in contact with Christian civilization, and by intercourse with the powerful white race … fit themselves to go back to their own land and make of that land what the white man had made of Europe and of America.” He contributed to African missions by founding the Voice of Missions (1892), promoting immigration of American blacks to Africa, and traveling there on four occasions in the 1890s to initiate and strengthen AME work. He founded AME annual conference in Sierra Leone, Liberia, and South Africa. Disillusioned by the racism in the United States, he later moved to Windsor, Ontario, where he died.

Turner, Henry McNeal. “The American Negro and the Fatherland.” In Addresses and Proceedings of the Congress on Africa Held Under the Auspices of the Stewart Missionary Foundation for Africa of Gammon Theological Seminary in Connection with the Cotton States and International Exposition December 13-15, 1895, edited by J. W. E. Bowen. Miami, FL: Mnemosyne Publishing Inc, 1969.

_____. The Barbarous decision of the United States Supreme Court declaring the Civil Rights Act Unconstitutional and Disrobing the Colored Race of All Civil Protection: the Most Cruel and Inhuman Verdict Against a Loyal People in the History of the World. Also the Powerful Speeches of Hon. Frederick Douglass and Col. Robert G. Ingersoll, Jurist and Famous Orator. Chapel Hill, NC: Academic Affairs Library, University of North Carolina at Chapel Hill, 2000.

Biography of Henry McNeal Turner at the Documenting the South project of the University of North Carolina at Chapel Hill.