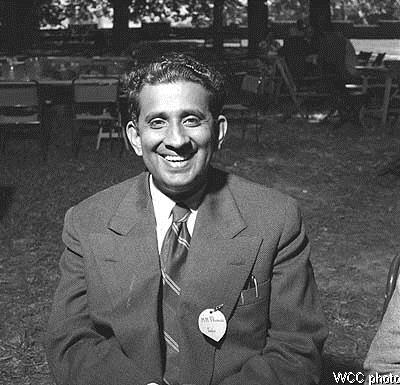 Born in the Travancore region of Kerala, Thomas was raised in the Mar Thoma Syrian Church, whose combination of ancient sacramental liturgy with modern evangelical spirituality undergirded his life and ministry. His early Christian youth work and social action in India projected him onto the scene after World War II. From 1947 to 1953 he was on the staff of the World Student Christian Federation in Geneva. The Christian in the World Struggle, written by Thomas in 1952 with colleague David McCaughey, was an influential guide to Christian student groups in its time.

Thomas served the World Council of Churches (WCC) as moderator of its Central Committee fro 1968 to 1975. Earlier, he was Asian staff member of the WCC church and society department, then chair of the departmental working committee and co-chair of the World Conference on Church and Society in Geneva, 1966. He was also secretary of the East Asia Christian Conference for church and society concerns. He was a tireless speaker and writer, stimulating ecumenical debate and forging consensus, expressed in countless conference and meeting reports he helped write. Towards a Theology of Contemporary Ecumenism (1978) presents some of this work.

In India, Thomas served as associate, then director, of the Christian Institute for the Study of Religion and Society from 1958 until his retirement in 1975. His work produced a library of studies and conference reports on the religious and social dimensions of Indian life in Christian perspective. He also wrote extensively in his own name, interpreting Christian faith in light of the Asian revolution, in Indian society, and in encounter with Hinduism and secular ideologies. In retirement, he continued to write biblical studies and theology in Malayalam, his mother tongue. He served as governor of Nagaland, by appointment of the government of India, from 1990 to 1992.

Madathiparampil Mammen Thomas was one of the most remarkable Indian theologians, a renowned ecumenical leader, and an outstanding scholar who made an indelible mark on the twentieth century ecumenical movement. Thomas was a prolific writer both in English and his native language Malayalam, and wrote over 60 books and close to a thousand articles, some unpublished.

Thomas was born on May 15, 1916 in the South Indian State of Kerala in a devout Christian family belonging to the Syrian Marthoma Church, where he was raised in evangelical piety. After earning a university science degree, Thomas took up a teaching job which he left in 1937, becoming involved in social service and youth movements.

Thomas underwent a spiritual transformation which he called, “an evangelical spiritual experience.” His personal commitment to Christ, his upbringing in a strong Christian tradition, and his own personal meditation and study of the Bible and other devotional literature nurtured Thomas’ spirituality which he later sought to relate to his social involvement. Thomas was influenced by Gandhi, but later became more inclined towards Marxist ideology. From 1943, Thomas associated himself with the Student Christian Movement, and in 1947 he became the Secretary of World Student Christian Federation (WSCF). This new position brought Thomas in contact with leading theologians and ecumenical leaders in Europe and allowed him to be part of the discussions of the World Council of Churches prior to its formation. In Europe, his exposure to western liberal democracy and his disillusionment with new developments in communism both in India and Eastern Europe led to an ideological shift away from Marxism.

Between 1953 and 1961, Thomas became actively involved in the developing Asian ecumenical movement and participated in the WCC assembly of 1954 (Evanston). A significant event was the formation of the Christian Institute for the Study of Religion and Society (CISRS), Bangalore, India in 1957. P. D. Devanandan was appointed the first Director of CISRS and Thomas became the Associate Director. Thomas also played a major role in the formation of the East Asia Christian Conference (EACC) in 1959, which became the Christian Conference of Asia (CCA) in 1973.

The period from 1961 to 1975 was another significant phase in Thomas’ ecumenical journey. He became actively involved in the WCC with its New Delhi assembly in 1961, where he was elected Chairperson of the department of Church and Society. Thomas ably led the department during a period of turmoil and upheaval around the world. In 1962 Devanandan died and Thomas assumed the directorship of CISRS. An important milestone in Thomas’ life was his appointment at the Uppsala assembly in 1967 to be the Director of the Central Committee of WCC.

After long association with WCC, Thomas retired from both the Central Committee (1975) and also from CISRS (1976). This period also witnessed Thomas’ active engagement in India with political issues of the time. He reacted to the emergency under Prime Minister Indira Gandhi through his writings and organized campaigns for human rights and freedom. In 1990, the Indian government recognized Thomas’ contribution to public life by appointing him Governor of the Northeastern State of Nagaland. Thomas resigned as Governor in 1992, and devoted the rest of his life writing, including the production of a series of commentaries on the books of the Bible until his death in 1996.

As an ecumenical theologian and a social thinker, Thomas was deeply concerned about Christian mission. Thomas located his framework for mission in the person of Jesus Christ, the God-man, the God-for-Man, and thus his theology of mission is grounded in his Christocentrism. He recognized the redemptive work of God in the person of Christ and the proclamation of this message for the salvation of humanity. This evangelistic dimension of mission, for Thomas, was essential and the cutting edge of Christian mission. However, he did not confine mission only to this concept, what he called the ultimate destiny, but believed that mission must be understood in a broader perspective of the struggle for humanization, the historic destiny—human rights and social justice. For Thomas, salvation was eschatological, but the eschatological framework must embrace “the task of humanisation of the world in secular history.” Therefore, he maintained that humanization is an integral part of the Christian message of salvation, and it was intrinsic to salvation. He believed the search for humanization was embodied in the contemporary revolutions in which he discovered the mission dimension. Thomas saw Christ at work in revolutions, and he called upon the church to discern it and participate in this mission for an increased human dignity and fuller humanity.

_____. Salvation and Humanisation: Some Crucial Issues of the Theology of Mission in Contemporary India. Madras: CLS, 1971.

_____. The Secular Ideologies of India and the Secular Meaning of Christ. Bangalore: CISRS, 1976.

_____. Faith and Ideology in the Struggle for Justice. Bombay: Bombay Urban Industrial League for Development, 1984.

_____. Risking Christ for Christ’s Sake: Towards an Ecumenical Theology of Pluralism. Geneva: WCC, 1987.

Chacko, Mohan. Interpreting Society: A Study of the Political Theology of M. M. Thomas and its Implications for Mission. Dehardun, India, 2000.

Miyamoto, Ken Christoph. God’s Mission in Asia: A Comparative and Contextual Study of This-Worldly Holiness and the Theology of Missio Dei in M. M. Thomas and C. S. Song. Eugene, OR: Wipf and Stock, 2007.

Philip, T. M. The Encounter Between Theology and Ideology: An Exploration into the Communicative Theology of M. M. Thomas. Madras: CLS, 1986.

My Pilgrimage in Mission