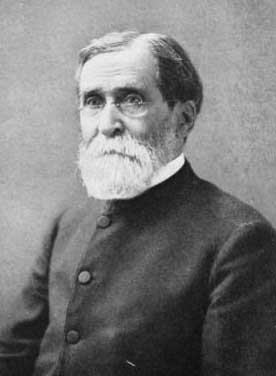 Born in St. Clairsville, Ohio, the son of immigrants from Ireland, Thoburn graduated from Allegheny College in 1857, entered the ministry of the Methodist Episcopal Church in 1858, and was sent to India by the Missionary Society of his church in 1859. He married Sarah Minerva (Rockwell) Downey, widow of a fellow missionary in 1861; she died in 1862 after giving birth to a son.

Initially Thoburn worked with William Butler, the first American Methodist missionary to India who had arrived in 1856, doing village evangelism and church planting in North India. Dissatisfied with the pace of expansion and the restrictions of comity agreements, Thoburn invited the American Methodist maverick evangelist, William Taylor, to come to India to lead a revival and the expansion of Methodist work. Taylor arrived in 1870 and for nearly five years, with the support of Thoburn, established congregations in seven leading cities across India. In 1874 Thoburn began a thirteen-year pastorate of the flourishing church founded by Taylor in Calcutta. In 1880, while speaking in the United States, Thoburn met and married Anna Jones, a medical missionary candidate, in Philadelphia. He returned to India two days after the wedding; she followed two years later after completing medical school.

Thoburn initiated Methodist work in Rangoon in 1879, and in Singapore in 1885. In 1888 he was elected bishop, with Episcopal responsibility for all of India, and Methodist work in Burma and Malaysia. In February 1899 he went to Manila to initiate Methodist work in the Philippines, which was then added to his area of Episcopal supervision. In 1900 Thoburn addressed the Ecumenical Missionary Conference in New York City.

Thoburn presided over an era of rapid growth of the Methodist Church in India, with mass movements of converts into membership, and expansion into Southeast Asia. He was one of the founders and editors of the Methodist periodical Lucknow Witness (later renamed The India Witness). He persuaded his sister Isabella Thoburn to join the work in India where she founded a college for women in Lucknow. With his wife and sister, Thoburn was instrumental in having the office of deaconess established in the Methodist Episcopal Church in 1888. His wife died in 1902, and, after a missionary career of forty-nine years, Thoburn retired in failing health to Meadville, Pennsylvania, in 1908, where he resided until his death. At the invitation of John R. Mott, Thoburn attended the Edinburgh World Missionary Conference in 1910. He received honorary doctorates from Allegheny College and Ohio Wesleyan University.

Thoburn’s journals and sermons are in the library of Allegheny College, Meadville, Pennsylvania.

_____. “Wayside Notes” In Western Christian Advocate. 1911. [autobiographical reflections in the magazine of the Methodist Episcopal Church]