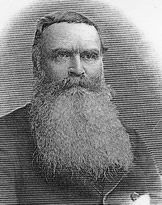 Born to Stuart and Martha (Hickman) Taylor in Rockbridge County, Virginia, Taylor was converted in 1841 at a Methodist Episcopal camp meeting. Appointed a Methodist missionary to California (1849), he ministered without salary to Native Americans and Chinese immigrants, and to the sick and the poor. His seaman’s Bethel mission complex in San Francisco burned down in 1856, forcing him to preach and write to repay loans. The first of seventeen books, Seven Years’ Street Preaching in San Francisco (1856), sold over 20,000 copies during its first year. Taylor’s experiences as an entrepreneurial missionary on the frontier became paradigmatic for the concepts he later called “Pauline missions.”

Seeking to raise funds, Taylor visited Australia and New Zealand (1863-1866) and then South Africa (March to October 1866) where his evangelistic campaigns among the black population were revolutionary. In South India from 1870 to 1875, he ignored mission comity agreements, establishing self-supporting, self-propagating, and self-governing Methodist Episcopal churches, and arguing that these be recognized as the ecclesiastical equals of churches in North America. This, as well as the recruitment and appointment of self-supporting missionaries as described in his Pauline Methods of Missionary Work (1879), led to conflict with the Methodist mission board in New York, which attempted to define his churches as missions, thereby placing them in the control of the mission board. Taylor maintained an adversarial relationship with the board for the rest of his life.

Elected in 1884 as Methodist Episcopal missionary bishop for Africa, he established self-supporting churches in southern Liberia, Sierre Leone, Angola, Mozambique, and Zaire. He described Africa and narrated his experiences in Story of My Life (1895; published also as William Taylor of California, 1897). A folk hero for his refusal to capitulate to the demands of the Methodist mission board, Taylor became the primary mission theorist for radical Methodist and Holiness missionaries as well as Pentecostal mission efforts in Europe, Latin American, Africa, and Asia. Taylor University (Upland, Indiana) was named for him.

_____. The Model Preacher: Comprised in a Series of Letters Illustrating the Best Mode of Preaching the Gospel. Cincinnati: Poe & Hitchock, 1859.

“William Taylor.” In Davies, Rev. E. The Bishop of Africa; or the Life of William Taylor, D. D. with an account of the Congo Country, and Mission. Reading, MA: Holiness Book Concern, 1885.