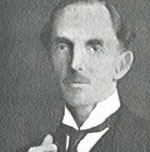 Studd was the youngest of three sons born to Edward Studd, a wealthy retired jute and indigo planter in Wiltshire, England. Considered England’s most outstanding cricket player, Studd, together with six other remarkable Cambridge students (the Cambridge Seven), dedicated his life to foreign missionary service. His decision caused a sensation in the public press and lit the flame for the Student Volunteer Movement (SVM). He gave away his substantial inheritance and sailed to China under the China Inland Mission (CIM) in 1885, endorsing wholeheartedly the CIM’s radical incarnational principles in the context of extreme adversity. In China he married Priscilla Steward, a young Irish missionary, and together they had four daughters.

Forced home in 1894 by poor health, Studd itinerated throughout the United States and Britain on behalf of the SVM for six years before moving to India in 1900 to serve as minister of the English-speaking church at Ootacamund. Again in poor health, he returned to England in 1906 to resume his speaking ministry. In 1910, still sickly, and against the wishes of his ailing wife, he embarked for Africa, returning a year later to establish the Heart of Africa Mission, later to become WEC. In 1913, accompanied by his future son-in-law, Alfred Buxton, Studd began his 18-year missionary endeavor in the Belgian Congo (Zaire). Inspiring as an exemplar, he proved to be an obstinate and unreasonable leader and colleague, provoking bitter conflict with family, fellow missionaries, and Africans until his death. His wife, who remained in England throughout his tenure in Africa except for a lone visit in 1928, died in 1929. After Studd’s death at Ibambi, the struggling organization that he founded began to flourish under the capable leadership of another son-in-law, Norman Grubb. Today, WEC, evincing the radical spirit of its founder, is an international community of some 1,500 missionaries serving in fifty-one different countries.

Virtually all of Studd’s personal correspondence is located at the WEC International offices at Gerrards Cross, Bucks, England, and at Fort Washington, PA.

The photo is in the public domain.