World leader in ecumenism and evangelism 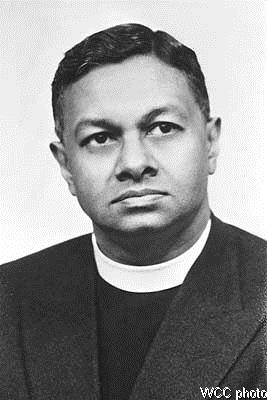 Niles was born in Jaffna, Ceylon (Sri Lanka), into a family of Congregational and Methodist ministers dating to the first Tamil convert in 1821. He was graduated from what is now United Theological College in Bangalore, India, later earning a doctorate at the University of London. His ecumenical involvement began with the Student Christian Movement for India, Burma, and Ceylon and continued at the International Missionary Council meeting in Madras in 1938. He delivered the keynote address at the founding of the World Council of Churches (WCC) in Amsterdam (1948) and also spoke at Evanston (1954) and Uppsala (1968). In the WCC he served successfully as chairman of the Youth Department, executive secretary of the Department of Evangelism, and one of the six world presidents. Meanwhile, he headed the Methodist Church of Ceylon, the National Christian Council of Ceylon, the World’s Student Christian Federation, and the East Asia Christian Conference (which he was instrumental in founding). Though he was an active and faithful Methodist, he was dedicated to worldwide ecumenism rather than national or denominational confessionalism.

Niles considered his primary calling that of an evangelist, a witness to the living Christ as personal savior, a task he once defined as “one beggar telling another beggar where to get food.” Influenced by friends as theologically diverse as Visser t’ Hooft, Karl Barth, Emil Brunner, Reinhold Niebuhr, John R. Mott, and E. Stanley Jones, he acknowledged special indebtedness to Hendrik Kraemer and Paul Devanandan for complementary approaches to other religions.

His own theology combined the richness of Eastern Orthodoxy and Western Protestantism with the devotion of surrounding Asian traditions. Yet he insisted that “the Christian Faith can be proclaimed; the other faiths can only be taught,” because there is “true and essential discontinuity.” As both writer and preacher, he consistently drew on the Bible as his principal source, and his published works, numbering at least a score, included several thoughtful and specific studies of Scripture, as well as three major lecture series on preaching. Many of his poems appear in The East Asian Christian Hymnal, which he helped to edit. He is remembered most for his commitment to evangelism and ecumenism.

_____. Upon the Earth: The Mission of God and the Missionary Enterprise of the Churches. London: Lutterworth Press, 1962.

_____. Living with the gospel. London: United Society for Christian Literature, 1957.

_____. Preaching the gospel of the resurrection. Philadelphia: Westminster Press, 1953.

_____. The power at work among us: meditations for Lent. Philadelphia: Westminster Press, 1968.

_____. The temple of Christ in Ceylon: being an exposition of the Ceylon Scheme of Church Union. London: Methodist Missionary Society, 1948.

_____. Whose I am and whom I serve: a presentation of the Christian message. London: Student Christian Movement Press, 1939.

The additional article below is provided with permission from the International Bulletin of Missionary Research Legacy of D. T. Niles