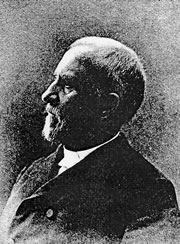 Born near Ovid, New York, Nevius attended Union College, Schenectady, New York, and Princeton Seminary (B.D., 1853). Called to missions while at Princeton, Nevius sailed from Boston with his wife, Helen (Coan), in September 1853 and arrived in Ningpo, China, six months later. Both were good students of the Chinese language, and in little more than a year Nevius was preaching and teaching. He and his wife spent most of their time in China in Shantung (Shandong) Province. Itineration formed a key to his missionary method. Most of each year he visited churches on horseback, encouraging, disciplining, and instructing. From June through August each year, however, between thirty and forty men would come to their home for systematic Bible study. He emphasized especially the importance of establishing self-propagating, self-governing, and self-supporting churches, Bible study, strict discipline for believers, cooperation with other Christian groups, and “general helpfulness where possible in the economic life problems of the people.” He created a Manual for Inquirers, setting forth rules and regulations for believers; these were also mounted on placards in the chapels. The manual included Bible study methods, how to pray, the Apostles’ Creed, and passages of Scripture to be memorized.

In 1890 Nevius was invited to explain his method to the new Presbyterian missionaries in Korea. His principles so shaped the Protestant church in Korea that much missionary work as well as local church leadership and organization follow his original design to this day.

Nevius, John Livingstone. China and the Chinese: a general description of the country and its inhabitants, its civilization and form of government, its religious and social institutions, its intercourse with other nations, and its present condition and prospects. New York: Harper & Brothers, 1869.

_____. Demon Possession and Allied Themes: Being an Inductive Study of Phenomena of Our Own Times. Chicago: Revell, 1894.

_____. Demon Possession and Allied Themes: Being an Inductive Study of Phenomena of Our Own Times. 7th ed. with corrections and supplement. Chicago: Revell, 1895.