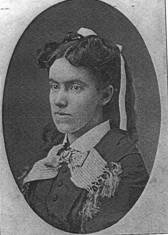 Born in Albermarle County, Virginia, Moon was educated at the Virginia Female Seminary (now Hollins College), near Roanoke, and at the Albermale Female Institute in Charlottesville, where she received an M.A. in classics in 1861. She returned home and remained there during the final years of the Civil War; then, for three brief periods, she taught school in Alabama, Kentucky, and Georgia. Moon was appointed missionary to China in 1872, one of the first unmarried women to be sent by the Southern Baptist Convention Foreign Mission Board. Her entire 40-year career was spent in northern China, first in Tengchow and later in Pingtu. Not satisfied to be only a teacher of Chinese children, she also became an effective evangelist of Chinese women.

Her most conspicuous contributions, however, were her challenge to Southern Baptist women to form their own missionary

organization for the support and promotion of foreign missions, and her admonition to young women to heed the call of China. Her constant stream of letters and articles appealing for more recruits and financial support prompted Southern Baptist women to initiate an annual Christmas offering for foreign missions in 1888 — an offering later named for Moon — which grew from an initial $3,000 to more than $82 million in 1993. Her impact on board policy was extraordinary and included her advocacy for women to be utilized as missionary evangelists, for newly appointed missionaries to be involved in mission work immediately (rather than waiting to complete language study), and for establishing regular furloughs for all missionaries. Her deep respect and belief in the ability of the Chinese people was in sharp contrast to the attitude of some of her colleagues. “It is comparatively easy to give oneself to mission work,” she once said, “but it is not easy to give oneself to an alien people. Yet the latter is much better and truer work than the former.”

Moon chided Southern Baptists for their doctrinal disputes, the inconsistency of their sending missionaries to Africa while oppressing or ignoring blacks in the United States, and their meager interest in and support of foreign missions. Forty years of such admonitions and appeals had their effect, and the Southern Baptist Convention became one of the leading missionary sending bodies in the world.

Moon survived numerous hardships, including the Boxer Rebellion of 1900-1901, but loneliness and recurring bouts with illness and emotional depression brought on by malnutrition during a national famine induced her colleagues to insist that she return to the United States. In December 1912 she was carried on board a ship bound for America, but she died on Christmas Eve, while the vessel was anchored in the harbor of Kobe, Japan. Her stature and impact have increased since her death.