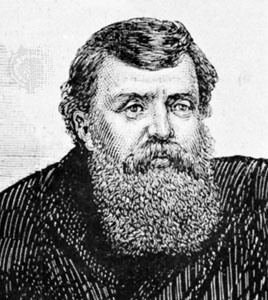 Born in Northfield, Massachusetts, Moody left home at age 17 to work in his uncle’s shoe store in Boston. Converted under the influence of his Sunday school teacher, he joined a Congregational church. In 1856 he headed for Chicago, where he engaged in a variety of business pursuits and evangelistic work. He started a Sunday school in 1858 and served as an evangelist and relief worker with the U.S. Christian Commission during the Civil War. In 1863 he organized the independent Illinois Street Church in Chicago, and in 1866 he became president of the city’s YMCA. Moody made a preaching tour of major British cities during the years 1873 to 1875, during which he and songster Ira Sankey attracted enormous crowds. For the next five years he conducted urban revivals in America’s largest cities, then returned to Great Britain for another series of meetings from 1881 to 1884. His urban campaigns in North America continued until 1891, when he began to focus on other endeavors.

Moody’s efforts helped to shape a new and ardently evangelical transatlantic network. In 1880 he founded the Northfield Conferences, which were used to promote holiness teachings, premillennial views of the end times, and the use of nondenominational agencies to propagate the gospel. Speakers such as James Hudson Taylor, founder of the China Inland Mission, were featured at Northfield. A YMCA conference for college students at Northfield in 1886 led to the formation of the Student Volunteer Movement for Foreign Missions, which adopted the watchword “the evangelization of the world in this generation.” In 1889 Moody assisted in the founding of a Bible institute in Chicago to train urban evangelistic workers and foreign missionaries. This school, renamed the Moody Bible Institute after Moody’s death, proved to be his greatest contribution to the missionary enterprise. It has trained more missionaries than any other single institution in the United States.

Significant collections of Moody’s papers are held at the library of Yale University Divinity School, the Library of Congress, the Moody Bible Institute, and the Mount Hermon School in Northfield, Massachusetts, USA.

Gundry, Stanley M. Love Them In: The Proclamation Theology of Dwight L. Moody. 1982.