Missionary and educator in Korea 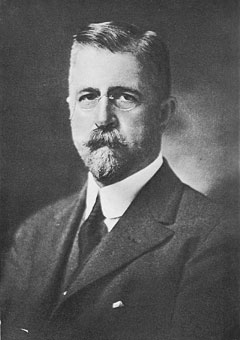 Born in New Haven, Vermont, Hulbert graduated from Dartmouth College in 1884. After two years of study at Union Theological Seminary in New York, he arrived in Korea in 1886 and served for five years as a teacher at the Royal English School in Seoul. A Congregationalist, his only missionary service was with the Methodist Episcopal Church in Korea from 1893-1897. In this period he directed the Trilingual Press, supported the progressive and independence movements, preached, and wrote of his research on Korea. A confidant of the Korean king, he served from 1897 to 1905 as principal of the Imperial Normal and Middle Schools and published a series of texts for modern education in Korean. He published his History of Korea in 1905 and The Passing of Korea in 1906, which reflect his growing disillusionment with Japan’s aggression in Asia. An indefatigable advocate of Korean progress and independence, he played an active, though unsuccessful, role in Korea’s behalf during the diplomatic negotiations that led to Japanese control and annexation of Korea between 1905 and 1910.

Returning to the United States, Hulbert was ordained in the Congregational Church in 1911 and spent over a decade championing the Korean cause on the lecture circuit. He was invited to Korea by President Syngman Rhee when the Republic of Korea was established in 1948, but his wife’s death delayed his travel until 1949. He died soon after his arrival and was buried with full national honors in Seoul.

Most of Hulbert’s important articles can be found in The Korea Review and Korean Repository.

A short biography is in vol. 1 of Hulbert’s History of Korea, Clarence Norwood Weens, ed. (New York: Hillary House Publishers; Routledge and K. Paul, 1962), while vol. 2 provides an annotated bibliography of his writings.

Hulbert, Homer B. A Comparative Grammar of the Korean Language and the Dravidian Languages of India. Seoul: The Methodist Pub. House, 1905.

Vanderlip, Washington B. and Homer B. Hulbert. In Search of a Siberian Klondike. New York: The Century Co., 1903.