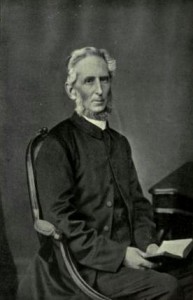 Born in England, French served with the Church Missionary Society (CMS) in India during the second half of the nineteenth century. His early years in the Northwest Provinces (1850-1863) saw the emergence of the two motifs which marked his missiology. The first was education as a means of evangelism. In Agra he founded and developed St. John’s College, a secondary school that offered quality education to Hindu and Muslim children. His second passion was for direct evangelism. Cofounder of the Derajat Mission in the frontier regions of Baluchistan, he was reputed as the “seven-tongued evangelist.” His skill in languages and appreciation of poetry combined to make him an effective if controversial preacher in village markets.

The second phase of French’s life was committed to nurturing the growth of an indigenous Indian convert church. In 1869 he founded St. John’s Divinity School in Lahore for the training of Indian Christian pastors. After several years of teaching, he was appointed Anglican bishop of Lahore in 1877. To encourage the Indian church to acquire the best of theological education, he founded the Cambridge-Delhi Mission. To help root the Indian church in Indian culture, independent of foreign cultural norms, he pioneered the preparation of theological literature that respected Indian literary traditions, and he experimented with indigenous patterns of worship reflecting the cultural backgrounds of Muslim and Hindu converts. The catholicity of an indigenous church required ecumenical openness, for which he articulated the vision of “one common church for all India.” In these ways he foresaw the indigenous Indian church being able to take over the task of evangelism from the Western missionary.

French retired to Britain in 1887, but four years later he responded to a CMS call for evangelists to Arabia. The last months of his life were spent as an itinerant preacher in Muscat, where he hoped to find ways of bringing the gospel to the historical heartland of Islam. His death in 1891 shortly predated the formation of the (American) Arabia Mission, which was inspired by his example.

French, Thomas Valpy. The Old Commandment New and True in Christ: Sermons Illustrative of the Vital Unity and Harmony Throughout, of the Old and New Testament. London: Seeley, Jackson & Halliday, 1869.

French, Thomas Valpy. “The Lord’s Voice Unto the City.” Sermons Commemorative of the War, the Pestilence, and the Mutiny, Preached in the Years 1852-1858, Chiefly to … Congregations in Agra. Calcutta: Bishop’s College Press, 1859.

_____. “Remember How Thou Hast Heard.” Selections from the Pulpit Addresses, of a Brief Ministerial Course, at Clifton, Bristol; Chiefly Adapted to the “Times and Seasons.” London: n.p., 1862.

_____. The Proposed Cambridge University Mission in North India: Being the Substance of a Paper Read Before the Cambridge Mission Aid Society on February 16, 1876. [Cambridge]: n.p., 1876.

_____. “Preface.” In Sarah Secunda Hewlett, Daughters of the King. [A description of missionary work among the native women of India.] … With a Preface by the Bishop of Lahore [T. V. French]. London: Church of England Zenana Missionary Society, 1886.

_____. The Persia and Baghdad Mission: An Account of the C.M.S. Mission, with Letters and Reports from the Bishop of Lahore, and the Revs. Dr. Bruce, T.R. Hodgson, and G. Shirt. London: Church Missionary House; Seeley, Jackson & Halliday, [1887?].

French, Thomas Valpy and Henry Fisher Corbyn. A Rejoinder to the Bishop of Lahore’s Defence of Theism, as a Basis and Criterion of Morals. Calcutta: H.F. Corbyn, 1883.