Baptist missionary to China known for her work with Bible women 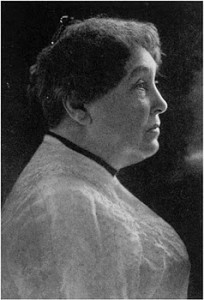 Fielde was born in New Hampshire and grew up in the Universalist church tradition. In her late 20’s she became engaged to a Baptist missionary candidate to Siam (Thailand), agreeing to become a Baptist and to join him on the field to be married. When she arrived in Siam in 1865 after a long ocean voyage, she learned that he had died months earlier. She took over his ministry amid her grief but did not fit in with the Baptist missionary community. Her dancing, card-playing, and associations with the diplomatic community resulted in her dismissal from the mission. She returned home to the United States but later was reinstated and reassigned to China. Settling at the port city of Swatow (Shantou), Kwangtung (Guangdong) Province, she initiated Bible women’s work, training native women to go out as evangelists and Bible teachers. During her 20-year tenure in China she established schools, wrote curriculum, and trained some 500 Bible women. After her retirement she returned to the United States and became involved in scientific research. Ten years following her death she was eulogized by her Baptist mission agency as the “mother of our Bible women and also the mother of our Bible schools.”

_____. Parliamentary Procedure; A Compendium of its Rules Compiled from the Latest and Highest Authorities, for the Use of Students and for the Guidance of Officers and Members of Clubs, Societies, Boards, Committees, and All Deliberative Bodies. Seattle: Helen N. Stevens, 1914.

_____. A Political Primer of New York State and City: The City Under the Greater New York Charter. New York: Macmillan, 1897.

_____. Rules for Guidance in Conversation. New York: Printed for the League for Political Education, 1903.

_____. “Suggested Explanations of Certain Phenomena in the Lives of Ants; With a Method of Tracing Ants to Their Respective Communities.” Biological Bulletin 13, no. 3 (August 1907): 134-7.