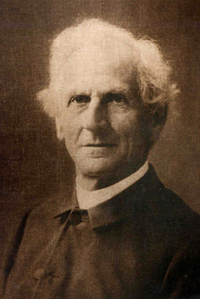 Bliss entered Amherst College at age 25, supporting himself and graduating in 1852 (D.D., 1863). Three years later he graduated from Andover Theological Seminary, was ordained into the Congregational ministry, married Abby Maria Wood, was appointed by the American Board of Commissioners for Foreign Missions (ABCFM), and sailed for the Near East. After he had served five years at Abeih and Suq al-Gharb, Lebanon, managing schools, itinerating, and preaching, the Syria Mission of the ABCFM voted in 1862 to establish a Syrian Protestant College and Bliss was chosen to organize it and serve as its president. The aim was to “enable native youth to obtain, in the country, [a] literary, scientific, and professional education” in a self-governing, self-sustaining indigenous institution not supported or controlled by the mission but nevertheless “conducted on strictly Christian and evangelical principles.” Bliss spent two years in America and Britain winning prominent and generous supporters, including W.E. Dodge, his son, D. S. Dodge, the Earl of Shaftsbury, and John Bright. He secured a New York State charter for an institution governed by a self-perpetuating board of trustees, elected in the first instance by the Syria Mission. The college opened in 1866 with two tutors and Bliss as professor and soon began to draw students from all over the region, representing all Christian communities as well as Druze, Jews, and Muslims.

Bliss was intensely active in all aspects of the college, cultivating support, developing the campus, and participating in the school’s academic and religious life. He described himself as born a Baptist, brought up a Methodist, ordained a Congregationalist, and laboring (in 1881) among Presbyterians. His liberal evangelical perspective is reflected in an Atlantic Monthly article (May 1920), “The Modern Missionary,” written by his son, Howard Bliss, who succeeded him as president in 1903. The college became the American University of Beirut in 1920. A major thoroughfare in Beirut was named Rue Bliss.

Image of College Hall at American University of Beirut on Rue Bliss.