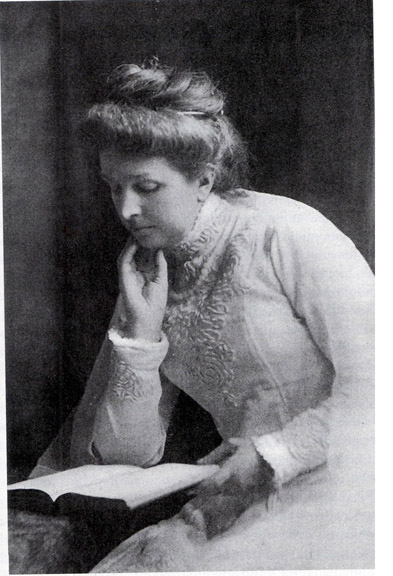 Born in Mount Washington, Massachusetts, Elaine Goodale and her younger sister, Dora, wrote poems about their lives. In 1877, when they were ages 13 and 10, they produced Apple Blossoms: Verses of Two Children. At age 20, Elaine took her first teaching post at a missionary school for Indians at blacks, in Virginia. In 1884, she visited the Great Sioux Reservation in Dakota Territory and wrote detailed reports, which were published in New York and Boston newspapers. She convinced the commissioner of Indian Affairs, John Atkins, of the need for an Indian industrial day school, where cooking, sewing, and gardening would be taught along with academic subjects. She became the first government-appointed teacher at White River camp. Her desire to expand her efforts to other areas resulted in her appointment in 1890 as supervisor of education in Dakota Territory. She traveled several hundred miles to visit fifty Sioux schools and organize teachers’ institutes. In 1891 she married Charles A. Eastman, a Sioux physician whom she met while nursing wounded prisoners. She relinquished her career for a role as wife and mother to six but continued to write about her Indian experiences until her death.

____. The Senator and the School House. Philadelphia: Indian Rights Association, 1886.

Eastman, Elaine Goodale. The Voice at Eve. Chicago: The Bookfellows, 1930.