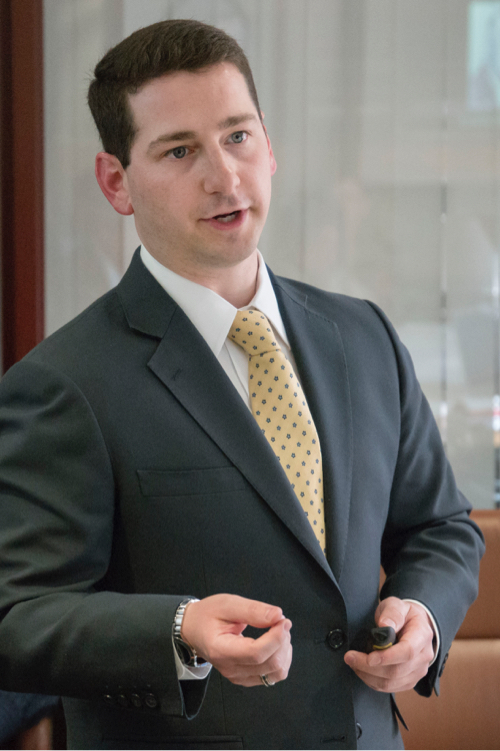 The expert in criminal law, international law, national security law, and international and transitional justice will deliver the annual Kleh Lecture on April 3.

Professor Zachary D. Kaufman has joined Boston University School of Law as the William & Patricia Kleh Visiting Professor in International Law for the spring 2023 semester. He will teach two courses—National Security Law and Transitional Justice—and will deliver the annual Kleh Lecture in International Law on April 3.

The author or editor of three books and more than 40 articles and book chapters, Professor Kaufman is currently working on his fourth book (under contract with Cambridge University Press), this one on the law and politics of bystanders and upstanders. He has also written for popular outlets, including the New York Times, Washington Post, Chicago Tribune, Boston Globe, Foreign Policy, Forbes, among others, and both of the leading international law blogs (Just Security and Opinio Juris).

Professor Kaufman has served in all three branches of the US government. In the judicial branch, he was a US Supreme Court fellow and clerk to a distinguished BU Law alum, Hon. Juan R. Torruella (’57), on the US Court of Appeals for the First Circuit. In the legislative branch, he was a Council on Foreign Relations international affairs fellow on the US Senate Foreign Relations Committee, during which he was a lead architect of both the Elie Wiesel Genocide and Atrocities Prevention Act (enacted in January 2019) and the Syrian War Crimes Accountability Act (enacted in August 2018 as part of the National Defense Authorization Act). In the executive branch, he served at the US Departments of Justice and State. He also has served at three international war crimes tribunals: the International Criminal Court (where he was the first American to serve) as well as the United Nations International Criminal Tribunals for Rwanda and for the Former Yugoslavia. In the private sector, Professor Kaufman has practiced law at O’Melveny & Myers LLP and worked at Google.

Professor Kaufman received his JD from Yale Law School, where he was an Olin Fellow, editor-in-chief of the Yale Law & Policy Review, managing editor of the Yale Human Rights & Development Law Journal, articles editor of the Yale Journal of International Law, and cofounder and copresident of Yale Law Social Entrepreneurs. He earned his DPhil and MPhil, both in international relations, from the University of Oxford, where he was a Marshall Scholar. He earned his BA in political science from Yale University, where he was the student body president, cocaptain of the Yale Wrestling Team, and an All-American and Runner-up National Champion in the National Collegiate Wrestling Association.