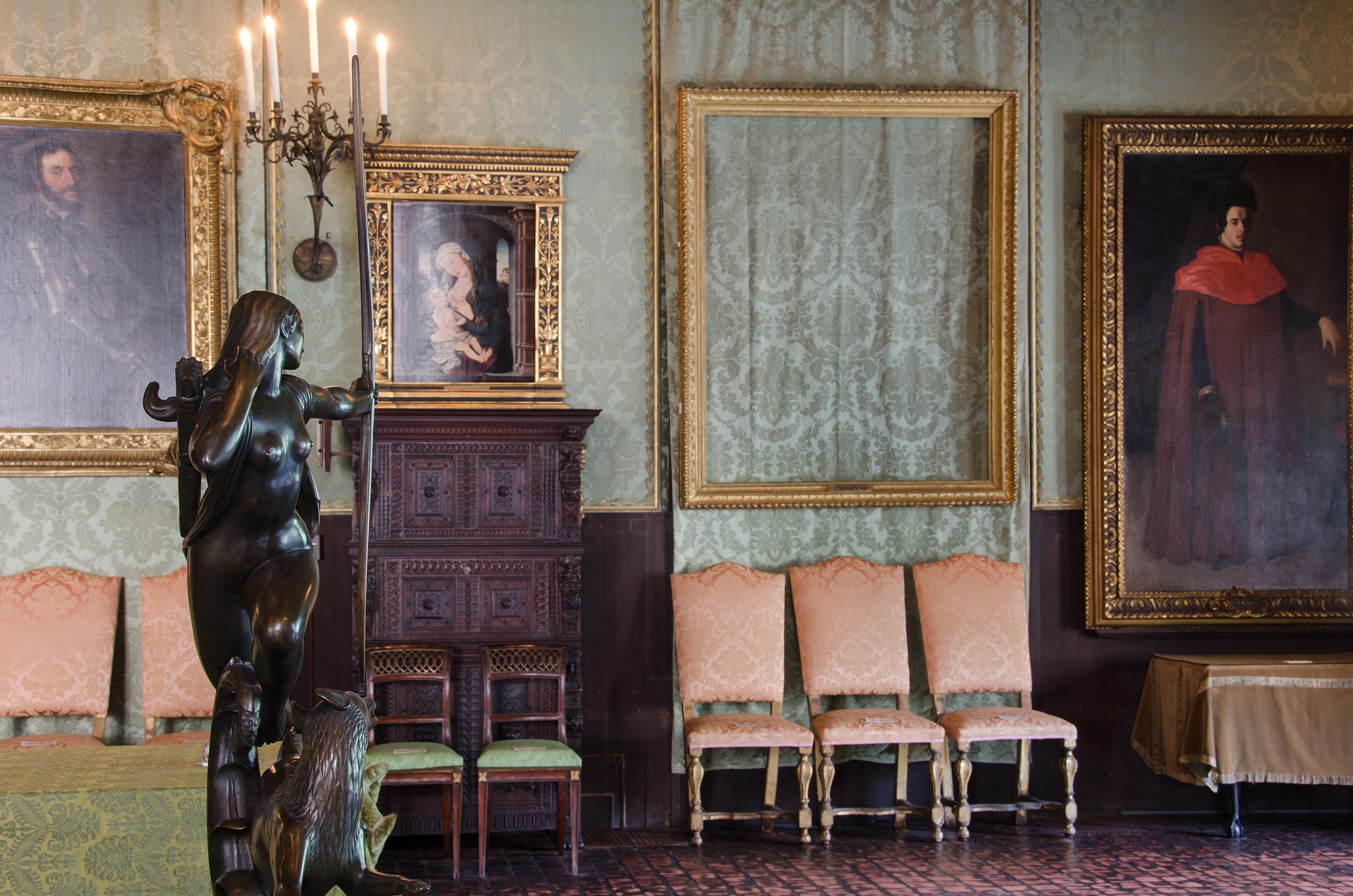 Photo by the FBI for the Isabella Stewart Gardner theft investigation

Rob Fisher has appeared in two Netflix documentaries and was interviewed for 60 Minutes. He’s been quoted in the New York Times, the New Yorker, the Boston Globe, and the Washington Post. Working on high-profile cases inevitably lands an attorney in the spotlight, and Fisher (’01), a partner at Nixon Peabody, has recently represented several high-profile clients, including an MIT scientist cleared of espionage charges earlier this year and the Stanford sailing coach caught up in the headline-grabbing college admissions scandal in 2019.

How does Fisher find himself involved in so many newsworthy cases?

“Some of it, really, is just luck that I met the right clients at the right time,” he says. But Fisher clearly bolsters his luck with a reputation as a rigorous and knowledgeable attorney, a knack for making and maintaining relationships, and a willingness to network.

“As I tell young practitioners who want to get into this space, the more lines you have in the water, the more likely you’re going to get a bite,” he says. “You have to stay out there—go to events, go to lunches, go to dinners. Be out there talking to people.”

Fisher leads Nixon Peabody’s practice in government investigations and white-collar defense. He promotes his practice whenever he can, in hopes that his name and firm will be top of mind (or at least at the top of a Google search) when potential clients are served subpoenas or realize they may be answering to government regulators.

As a former federal prosecutor, Fisher has extensive experience that can benefit such clients. Before joining Nixon Peabody in 2017, he spent nine years as an assistant US attorney, seeing many white-collar cases from the other side.

“When you’re at the US Attorney’s Office as a prosecutor, you’re getting two or three federal trials a year, so you’re getting great experience,” Fisher says. “You’re trying cases, getting before the judges, understanding how the agencies work, how the cases work. You become a subject matter expert in anything to do with federal law enforcement, and that’s appealing to prospective clients.”

Fisher has more than 14 years of experience as a government prosecutor. After graduating from BU Law in 2001, he spent two and a half years as a Middlesex County assistant district attorney and then three years as a Massachusetts assistant attorney general before joining the US Department of Justice (DOJ).

Starting his career as an assistant DA provided Fisher excellent opportunity to hone his trial skills.

“You’re in these local district courts that are very busy handling—you name it—bar fights, motor vehicle crimes, property theft, anything that comes in the door,” he says. “But what’s great about that is you’re on your feet all day, every day. You’re either on trial, or you’re in front of a judge for arraignment or a motion hearing. Even though I was only there for two and a half years, I think I had 55 jury trials.”

At the Attorney General’s Office, Fisher worked with state police detectives and federal agents to conduct wiretap investigations into suspected drug traffickers and members of the mob. He then moved to the DOJ as an assistant US attorney for the District of Massachusetts, conducting wiretap investigations on a federal level. He later transferred to the DOJ’s public corruption and special prosecutions unit, where worked on complex white-collar cases involving financial fraud, public fraud, bribery, and extortion.

The Gardner case was always something simmering that you would work, I don’t know, five percent of the time. At the end of the day, before I’d go get the bus home, I’d put in an hour—poking around in the database, talking to one of the agents, or reaching out to somebody who maybe was a witness.

One of the many cases Fisher worked at the DOJ is the still-unsolved mystery of the 1990 art heist at Boston’s Isabella Stuart Gardner Museum. The Gardner’s 13 stolen works of art—including paintings by Rembrandt, Manet, Degas, and Vermeer—had been gone 20 years when Fisher picked up the investigation in 2010. Even though it was a cold case, Fisher, a lifelong Bostonian who was a teenager when the heist took place, couldn’t resist taking a crack at the puzzle.

“The Gardner case was always something simmering that you would work, I don’t know, five percent of the time,” Fisher says. “At the end of the day, before I’d go get the bus home, I’d put in an hour—poking around in the database, talking to one of the agents, or reaching out to somebody who maybe was a witness.”

Much of the Gardner investigation has focused on organized crime, but as is clear from his comments in the 2021 Netflix miniseries about the robbery, Fisher doubts the mob was involved. The Gardner Museum is offering a $10 million reward for information leading to the recovery of the stolen works, up from the $5 million it offered when Fisher worked the case. If organized-crime figures had the paintings, Fisher says, someone surely would have confessed by now.

“A lot of those guys will come in and give up their mother for $50,000—never mind $5 million,” Fisher says. “So that theory really broke down in my eyes.”

Fisher left the DOJ in 2016, but the Gardner case still nags at him, and he often checks in with friends involved in the investigation. Once you’ve worked this case, he says “you can never really put it to bed.”

For his eighth-grade yearbook, Fisher was asked what he wanted to be when he grew up. His answer: a CIA agent. By the time he was in high school, he’d decided he’d rather join the FBI.

“I really liked investigating things,” he says, “trying to figure out that puzzle of what happened, who did it, and then how to prove it.”

That interest led him to BU Law and its Criminal Law Clinical Program. As a student in the prosecutor clinic, Fisher appeared before judges in Quincy District Court and found he enjoyed the work, which led to his first job as a state prosecutor and eventually to his job as a federal prosecutor, working hand-in-hand with FBI agents to build cases.

Fisher joined Nixon Peabody after a stint as senior litigation counsel for the Financial Industry Regulatory Authority. In private practice, he has helped clients navigate high-stakes government investigations involving everything from financial fraud and real estate to counterintelligence, cryptocurrency, medical devices, pharmaceuticals, and the cannabis industry. And he still gets to conduct investigations, since his job often entails overseeing internal investigations for corporate clients.

The key to a successful investigation, whether it’s for a client or the government, Fisher says, is to avoid jumping to conclusions.

“Investigators get themselves in trouble when they think they know what happened already,” he says. While it’s human nature to make assumptions, “you have to do your best to not do that. Try to look at all the facts independently and have an open mind.”

Good investigators are also detail oriented. “And that’s tough these days because there’s so much evidence,” Fisher says. When the Gardner heist happened three decades ago, there were no doorbell cameras, emails, or text messages, but that case file is still enormous. Investigating a similar crime today, Fisher says, would require carefully choosing the lines of inquiry to pursue.

“Now, you just have so much data that you have to be somewhat picky in what you look at,” Fisher says. “If not, the investigation is going to take 10 years.” But once you’ve decided which lines of investigation are worth your time, he says, dig into every detail.

Championing a Whistleblower—and the Integrity of Sport