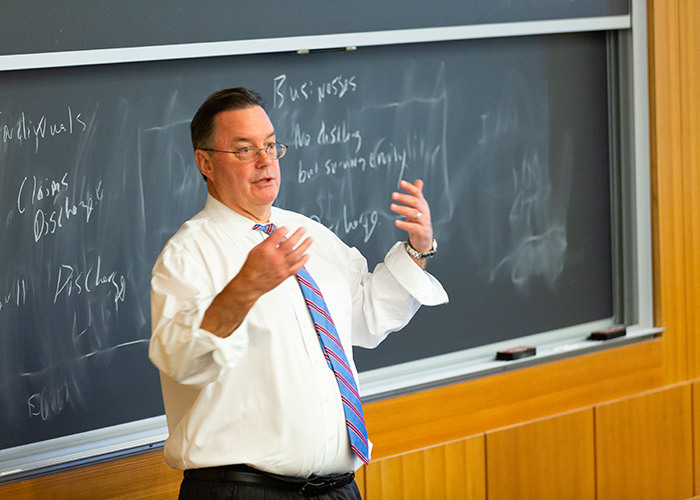 In 2005, when Audrey Schatz applied for student loans and enrolled in Western New England College School of Law, the single mother in her early fifties hoped she was preparing for a more lucrative second career. A decade later, however, she found herself underemployed, ill, and scrambling to make the $1,000-a-month payments on her student loans. Out of options, Schatz filed for bankruptcy relief, but her request to discharge her student loans was denied.

Today, Schatz is free of her crushing student loans—and her case has set new precedent in bankruptcy law—thanks to pro bono representation by BU Law Lecturer Francis C. Morrissey (’94), who took up her case on appeal.

Student-loan debt is notoriously difficult to erase. According to the US Bankruptcy Code, borrowers may be forgiven their debts only if repayment would impose “undue hardship” on themselves and their dependents—an extremely high standard to meet. Meanwhile, US student debt has reached $1.5 trillion—more than automobile and credit-card debt combined—and nearly 11 percent of student borrowers are in default.

The bankruptcy court denied Schatz’s request for an undue hardship discharge because the court found that she had enough equity in her modest Western Massachusetts home to pay her loans and ruled that this disqualified her from this type of relief. Had this decision stood, Schatz would have been forced to sell her home—the one asset she had to support herself when, because of age or poor health, she was no longer able to work—or attempt to take out a home-equity loan and be faced with yet another unaffordable monthly payment. In Schatz’s appeal, Morrissey argued that the equity in Schatz’s home was exempt property, protected from the claims of Schatz’s student loan creditors by the Massachusetts homestead statute and, as a result, Schatz’s ownership of this exempt property should not disqualify her from discharging her student loans. The Bankruptcy Appellate Panel agreed with Morrissey’s argument and sent the case back to the Bankruptcy Court, which discharged Schatz’s student loans.

This was an issue of first impression, and Schatz’s appeal establishes new precedent for future decisions. “The case holds that the ownership of exempt assets, by itself, does not preclude someone from getting an undue-hardship discharge,” says Morrissey, an experienced bankruptcy litigator who teaches in BU Law’s LLM in Banking & Financial Law Program. It’s an important development in the law, he says, because it clarifies that student borrowers don’t have to strip themselves of virtually all their assets to qualify for debt relief.

John Rao, an attorney with the National Consumer Law Center, told Massachusetts Lawyer’s Weekly that the bankruptcy court’s original decision would have presented huge problems to anyone hoping to obtain an undue-hardship discharge had it been allowed to stand.

Both Congress and the courts recognize that certain assets are necessary to maintain a minimal standard of living and to maintain your dignity as a citizen—and one important asset the law allows debtors to retain is a certain amount of equity in their homes.

Morrissey adds that the appellate panel’s decision reaffirms the importance of exempt property in debtor/creditor law in general. “The law does not take every asset from you, even if you owe money to creditors,” he says. “Both Congress and the courts recognize that certain assets are necessary to maintain a minimal standard of living and to maintain your dignity as a citizen—and one important asset the law allows debtors to retain is a certain amount of equity in their homes.

The Schatz case came to Morrissey through the Massachusetts Bar Association’s Student Loan Bankruptcy Assistance Project, which Morrissey cofounded and cochairs. “Unmanageable student debt is a huge social problem in this country and in this Commonwealth,” he says. The bar association recently created its assistance project, “recognizing that the people who are most likely to be eligible for an undue-hardship discharge are the people least likely to have the resources to hire a lawyer.” The project is training pro bono attorneys—even those without a bankruptcy background—to represent student borrowers in adversary proceedings.

Providing solid representation in student-loan cases is not only a boon for the borrowers, who often represent themselves unsuccessfully, but is also important for the development of the law. “When the courts are only hearing one side of the story, the law will necessarily become distorted,” Morrissey says. “When only one party has representation, the right arguments are not going to be presented to the court, and the record is not going to be properly developed. The system only works when all parties have a lawyer.”

Reach new heights with an LLM from BU Law

Intellectual rigor, real-world preparation, and professional achievement. Transform your standing in the legal profession with a graduate degree from BU Law.