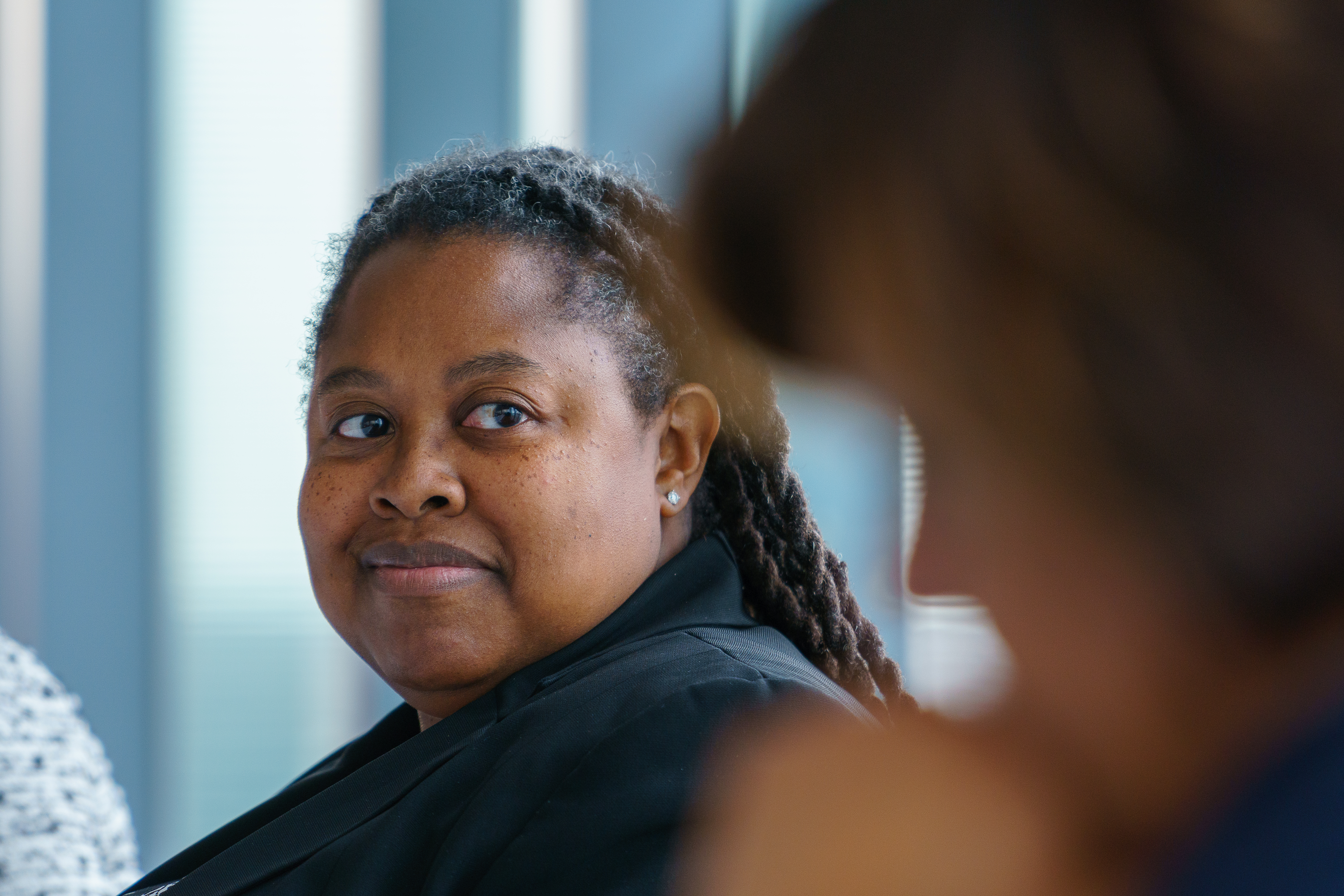 One Way to Level the Playing Field

For Sharon Jaquez (’21), one of the questions that troubled her as a person of color was how to talk to a hiring partner about her challenging background without sounding like she was asking for pity.

“During interviews, you’re often asked to describe adversity you’ve faced that will make you a better lawyer,” says Jaquez, who is now in her second year at BU Law. “I grew up in a low-income family with two immigrant parents. My mother doesn’t speak English and my father works long hours, so I had to do a lot for myself. But I don’t consider that the greatest hardship a person can face. So how do I present it in a way that doesn’t sound like I’m pandering?”

Jaquez found a place to ask her question—and many like it—when she joined a new program for first-generation law students and law students of color. In Real Law was founded in 2018 by two BU Law alumni—Robin Walker (’99) and Jamie Whitney (’94). Their goal was to provide a setting where underrepresented students could learn the ropes from dozens of experienced attorneys from a variety of practice areas.

“Students from well-educated families often feel confident in asserting themselves and asking for help, but many minorities lack the confidence to do this,” says Walker, senior vice president and chief legal officer at Stoke Therapeutics in Cambridge, Mass. “They don’t expect successful people to be willing to take the time to talk to them.”


There are not enough minority lawyers in Boston and the trend is going the other way. Our program gives students a leg up.

The program consists of four dinner meetings throughout the year that focus on skills for school success, the job search, and the early years of practice. Each dinner begins with a short presentation, a period for questions, and opportunities for students to have in-depth conversations with the lawyers at their table.

“These are among our highest-rated student events—the students love them,” says Nick Horan, associate director of academic enrichment.

He says many students of color suffer from feelings of inadequacy and self-doubt, commonly known as Imposter Syndrome.

“Law school is a very self-directed environment,” he says, “so you need the self-confidence that allows you to take risks and make mistakes.”

One simple but important way this confidence gap manifests itself is in the use of office hours.

“Students of color are less likely to assume they’re entitled to their professor’s time,” says Jaquez. “I only go to speak to a professor when there is something I absolutely don’t understand. And I feel that if I have to use this resource, it’s because I’m not smart enough to understand.”

For many participants, In Real Law provides access to successful lawyers who have had similar life experiences to their own. Walker notes that these opportunities are particularly important because of the lack of diversity in legal circles in Boston and across the country.

“There are not enough minority lawyers in Boston and the trend is going the other way,” she says. “Our program gives students a leg up. Before these firms even come to school to begin their interviews, you have made an impression.”

For Jaquez, the quarterly networking opportunities provided skills that helped her land a placement this summer at Ropes & Gray. She hopes to work in the firm’s healthcare practice, which is the career path she had planned to pursue after graduation.

Because community building is so important, the founders didn’t want to limit the program to BU Law students. This year’s participants include students from BU, Boston College, and Northeastern University. Walker plans to include additional schools next year.

“We are helping people who made it in the profession reach back and help these students build a network,” says Walker. “This is one of the ways to make real progress.”

One Way to Level The Playing Field