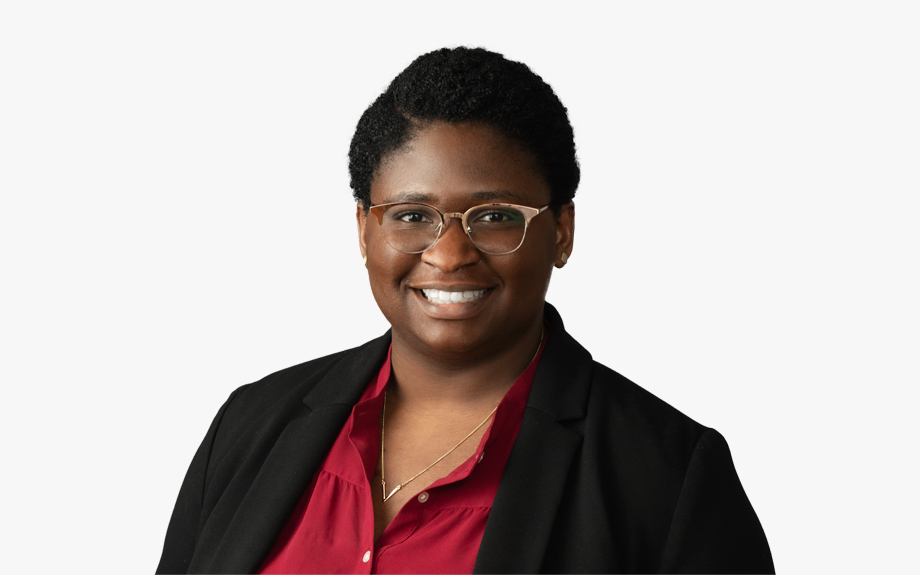 Andrea-Gale Okoro (’18), an associate in the healthcare law practice at McDermott Will & Emery, advises clients and helps analyze mergers and acquisitions, including in the context of the COVID-19 pandemic.

During her 1L summer, while working as a legal intern in the general counsel’s office of a nonprofit health insurance provider, Andrea-Gale Okoro (’18) was asked to research the rules governing healthcare payments for people who are incarcerated.

Depending on the circumstances, correctional institutions pick up the tab; otherwise, the costs are covered by state Medicaid programs, which are often administered by managed care organizations like Boston Medical Center (BMC) HealthNet Plan, where Okoro was working.

BMC HealthNet had been asked to reimburse a state Medicaid program for the cost of care provided to an incarcerated person because the Medicaid administrators felt the prison should have paid for the care instead. After doing some digging, Okoro was proud to report back to her supervisors at BMC HealthNet that the claim was properly paid; there was no reason to reimburse the money.

She was surprised by the response she received.

“The lawyers said, ‘This is really great, but we’re just going to repay the money,’” she remembers. “It didn’t make sense to kick up dirt over something so small when Medicaid was such a huge part of their income stream.”

The lesson was an important one for Okoro, who now regularly works with providers, insurance companies, hospitals, and other entities in the healthcare space as an associate in McDermott Will & Emery’s Boston office.

“It was the first time I got to see that, yes, lawyers need to find problems and figure out how to solve them, but we also need to be business counselors in some respects,” she says. “We can do all the legal analysis we want; at the end of the day, it’s a business-risk analysis that’s needed.”

Okoro knew she wanted to work in healthcare from a young age. She comes from a family of doctors and nurses and had planned to study medicine until a bioethics course at the University of Arizona opened her eyes to the possibility of combining her interest in policy with her love of science. Ultimately, she majored in political science and minored in public health.

It was the first time I got to see that, yes, lawyers need to find problems and figure out how to solve them, but we also need to be business counselors in some respects. We can do all the legal analysis we want; at the end of the day, it’s a business-risk analysis that’s needed.

Two other experiences as an undergraduate student helped Okoro find her way to the law: first, a course with Professor Christopher Robertson (who joined BU Law’s faculty from the University of Arizona in July) in which she worked on an empirical study testing how people’s medical decisions change based on a doctor’s financial conflict of interest (the study led to a paper published in Boston University School of Law’s American Journal of Law and Medicine, where Okoro later served as editor in chief); and, second, an internship at the Center for American Progress in which she researched legal challenges to the Affordable Care Act.

Together, the class and internship “really made me think that getting a JD and becoming an attorney was the best way to marry my interests in law, policy, and healthcare,” Okoro says.

She chose BU Law specifically for its health law program. In addition to her internship at BMC HealthNet Plan, she says two classes were particularly influential.

In a course with Lecturer Robert M. Thomas, Jr., cofounder of the Whistleblower Law Collaborative law firm, she learned about fraud and abuse cases under the False Claims Act, the Anti-Kickback Statute, and the Stark Law—what she calls the “the meat and potatoes” of any healthcare law practice. And, in Professor Frances H. Miller’s Food, Drug and Cosmetic Law seminar, she learned about the Food and Drug Administration’s regulatory regime. Each student in the class had to write a term paper proposing a fix for an existing or potential regulatory problem. Okoro’s paper focused on the lack of oversight for dietary supplements.

“Fran Miller is an amazing professor and is really good at taking the focus of law school away from finding problems and issue spotting and more on creating solutions,” she says.

At McDermott, Okoro recently helped a client determine how best to deliver their medical services—over the phone or via videoconferencing software—now that so many customers have dispersed around the country to wait out the COVID-19 pandemic.

“I’m trying to help them decide what kind of services they can provide without a license or violating a statute,” she explains.

Okoro also performs research and analysis on mergers and acquisitions, flagging potential issues, including existing or possible violations of the anti-fraud laws she learned about in Thomas’ course. Lately, such reviews have focused on whether companies have properly documented the use of any COVID-19-related relief funds and complied with state and national mandates designed to limit the virus’ spread.

“All the deals we’re working on now have specific representations and warranties around COVID-19,” she says. “We make sure all their ducks are in a row.”