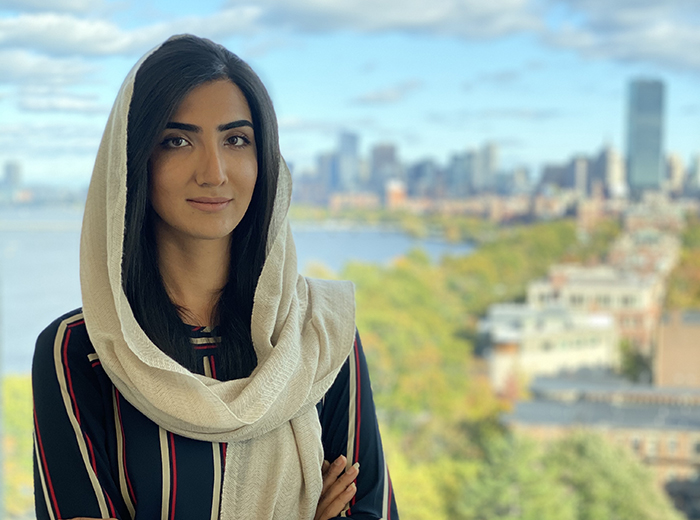 Revamping a Tax System to Drive Change in Afghanistan

How Haseena Rahman (LLM’20) plans to promote financial independence in her country.

Haseena Rahman is passionate about driving change in her home country of Afghanistan. As a Fulbright Scholar in BU Law’s Graduate Tax Program, her goal is to reform the Afghan tax system to generate sufficient revenue and decrease reliance on foreign aid.

Working as a legal advisor for the Ministry of Finance in Kabul, Rahman (LLM in Taxation’20) saw first-hand the need for change. “The current Afghan tax-related laws and regulations aren’t robust enough to address the complex tax needs of a country struggling to become financially independent. Foreign aid comes with strings attached for how we spend the money,” she says. “In order to truly become self-sufficient, we need to generate more revenue and taxes can play an important role in this.”

This will involve revising a significant portion of the tax system. Rahman explains, “There are many types of taxes that Afghanistan doesn’t have, but that are common in other countries. We also don’t have tax treaties with other countries. But we can’t just copy from another country’s tax laws or take a United Nations model for tax treaties and fill in our details. We need to create laws and policy that reflect what is good for Afghanistan.”

To move forward with reform, Rahman notes that the country needs more tax law experts. “When I worked at the Ministry on complex tax law issues, it was sometimes difficult to find experts who could provide guidance. I wanted to alleviate this knowledge gap by pursuing an LLM in tax. I want to use my expertise to negotiate deals in our favor, so we don’t harm ourselves.”

When she won a Fulbright Scholarship, Rahman came to BU Law because of its reputation as a top tax-law program and its excellent faculty. In the Graduate Tax Program, she is studying the tax systems of other countries with an eye to making improvements in Afghanistan. She is learning about tax policy and comparative income taxes around the world as well as transfer pricing—another potential source of revenue.

The current Afghan tax-related laws and regulations aren’t robust enough to address the complex tax needs of a country struggling to become financially independent. … In order to truly become self-sufficient, we need to generate more revenue and taxes can play an important role in this.

“The faculty are very supportive of my goals. I conducted an independent study under the supervision of Professor Richard T. Ainsworth, who is a comparative tax law specialist and worked firsthand on many of the cases we studied,” she says. “I researched and wrote about how Afghanistan should negotiate tax treaties and how to leverage our tax system to attract more foreign business investments.”

Rahman’s road to BU Law hasn’t been smooth. Born during a civil war in 1993, her family escaped to Pakistan when she was just 10 days old. She spent the next 11 years living as a refugee, attending a United Nations–supported school for Afghan children. “All of my teachers were refugees, and we often studied in tents because we lacked proper classrooms,” she recalls.

In 2004, her family returned to Afghanistan, where she continued high school and then attended the government-sponsored Kabul University to study law and political science.

Her early experience as a refugee inspired her commitment to helping Afghanistan rebuild and become self-sufficient. “Even as a teenager, I wanted to help my country by furthering my education outside of Afghanistan.”

This required learning English. While many of her friends took private English classes, she couldn’t afford the cost and decided to learn English on her own. “I got grammar and vocabulary books, practiced speaking by talking to myself, and read novels,” she says. It worked, and she became proficient enough in English to later take the GRE and TOEFL exams.

Now in her final semester with the GTP, Rahman has found the experience worthwhile on a number of levels. “I came here to learn tax law, but also to experience a US education. I sit in classes with many students who have studied in this country their entire lives and I can keep up, which builds my confidence that I can do this. I feel confident in my ability to return home and make a difference.”

As one of the few women in Afghanistan with her level of education, Rahman feels a great sense of responsibility to return. “There is still a lot of gender inequality in Afghanistan. Only a small percentage of the population in my country has this level of education and very few of them are women. I need to raise my voice not only for myself, but for women who don’t have voices in the current system.”

Seeing the value of her LLM education, Rahman hopes to continue her legal studies in the future. “I’m not going to stop because I want to be as prepared as possible to serve my country.”

Reach new heights with an LLM from BU Law

Intellectual rigor, real-world preparation, and professional achievement. Transform your standing in the legal profession with a graduate degree from BU Law.

Revamping a Tax System to Drive Change in Afghanistan