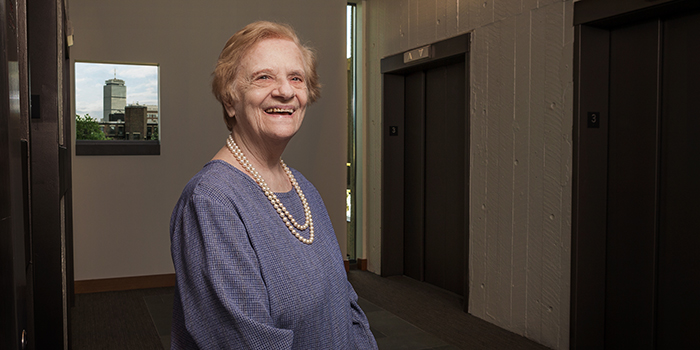 In recognition of Professor Tamar Frankel’s distinguished contributions to legal scholarship and to Boston University School of Law, Dean Maureen A. O’Rourke has appointed her to the Robert B. Kent chaired professorship.

The professorship was established with a gift from Richard Godfrey (’79), partner at Kirkland & Ellis and chair of the BU Law Building on Excellence Campaign. It was created to “recognize the strength of the law school, which is its faculty,” Godfrey said in a 2007 interview in The Record. Its namesake, Professor Robert B. Kent (’49), taught civil procedure at BU Law for more than 30 years, and was honored with a Silver Shingle Award for service to the school.

“I’m delighted to appoint Professor Frankel to the Robert B. Kent Chair,” says Dean O’Rourke, “Like Professor Kent, her dedication to generations of BU Law students represents the best qualities of a teacher and scholar.”

A prominent scholar of fiduciary law, with more than 50 years of service to the school, Frankel will retire at the end of the 2017–2018 academic year.

Professor Frankel was the first female professor to join the law school faculty when she began her career at BU Law in 1967. Over the course of her career, she has published 10 books and more than 80 articles and book chapters. She writes and teaches in the areas of fiduciary law, corporate governance, mutual funds, and the regulation of the financial system. She was recently profiled in the Wall Street Journal as the “intellectual godmother of the fiduciary rule.”

The Institute for Fiduciary Standard established the annual Frankel Fiduciary Prize in her honor in 2013 to recognize individuals who advance fiduciary principles. Earlier this month, the Association of American Law Schools’ Section on Women in Legal Education presented her with the Ruth Bader Ginsburg Lifetime Achievement Award.

WealthManagerWeb has named her among the 50 Top Women in Wealth Management. In addition, she was noted as one of the most well-known 500 lawyers on Lawdragon, and as one of the Women Trailblazers in the Law by the ABA Commission project on Women in the Profession. In 1998, Professor Frankel was instrumental in establishing and designing the corporate structure of the Internet Corporation for Names and Numbers (ICANN).

Professor Frankel was a visiting scholar at the Securities and Exchange Commission (1995–1997) and at the Brookings Institution (1987). She has lectured at Oxford University, Tokyo University, Harvard Law School, and Harvard Business School. She consulted with the People’s Bank of China and lectured in Canada, India, Malaysia, and Switzerland.

A native of Israel, Professor Frankel served as an attorney in the legal department of the Israeli Air Force, an assistant attorney general for Israel’s Ministry of Justice and the legal advisor of the State of Israel Bonds Organization in Europe. She has been in private practice in Israel, Boston, and Washington, DC and is a member of the Massachusetts Bar, the American Law Institute, and the American Bar Foundation.