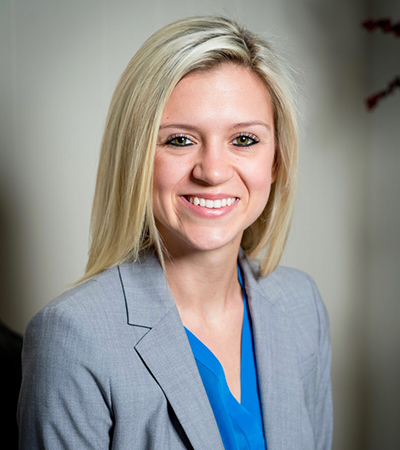 Megan Cunningham received the American Bar Association (ABA) Meritorious Service Award for her work with the Collegiate Recovery Program (BU CRP), an organization that offers support for students in recovery from substance use. She was nominated by Geraldine Muir, associate dean for student affairs at BU Law.

Cunningham was honored with the award at a ceremony in Kansas City, Missouri, during the ABA National Conference for Lawyer Assistance Programs Annual Dinner in October.

“She gives her time and shares her personal experience in a sincere manner that fosters trust with others. Megan empowers people to be their best self in what can be a very demanding environment,” Muir writes.

“I am proud of the efforts of the [BU CRP] and grateful to be at a school that provides a community for individuals in recovery,” Muir adds.

Cunningham has been involved with the efforts of the BU CRP since its inception.

“They were looking to hire a program assistant, and I had just gone into recovery myself… I think I was four months sober when I applied,” Cunningham says. “It was a brand-new program so it was really nice to kind of be able to shape it, like where we were going with it.”

As program assistant, Cunningham organizes weekly events for members. Attendance at Alcoholics Anonymous and Narcotics Anonymous meetings is optional for members, but they also offer social events like picnics and excursions.

She also notes that her position in the program has changed her own recovery “entirely.”

“I don’t think that I would be as open about my recovery, or the fact that I don’t drink, with anyone if not for the support of this awesome group of people I get to work with,” she says.

“As a leader in the group I feel as though I need to show that I’m not embarrassed about it. Part of my role at the CRP is to fight stigma surrounding alcohol and substance use and I can’t do that if I am not open about my recovery”

Stigma, Cunningham says, is one component of the “biggest issue” at BU Law. The other part of the problem, she says, is a “fear of the bar” and the implications of declaring that they are in recovery when they take the bar exam.

Because the BU CRP is an anonymous group in which members can be as involved or uninvolved as they want, Cunningham says that they don’t have to worry about how their participation in the group could impact their future.

“People don’t want to get help because they don’t know what that means for their license, and on top of that is the stigma that comes with alcohol and addiction and just being… different.”

Cunningham says alcohol plays a “big part” in the legal field, “more so than other fields,” so choosing not to drink at legal events can be a “struggle.”

“I think the problem is people are scared to come forward and say they have a problem because they don’t know what that’s going to mean for their future,” she says.

Her own future plans will allow her to continue to work in rehabilitation and recovery programs. Cunningham says she wants to pursue prosecution in drug court because she sees it as a much more rehabilitative setting than most criminal courts.

“It’s like a totally different type of setting between the prosecutor and the defense attorney,” she says.

“Everybody’s trying to work together to rehabilitate the drug court participant. It’s really interesting to me to be able to see rehabilitation in action as opposed to just sending somebody to jail for a drug crime when they have an addiction.”

Cunningham says that she is “extraordinarily honored” by the award.

“It’s been amazing, just amazing,” she said of the award, but also wanted to emphasize the importance of seeking help in the community.

“If anybody has an issue right now, within the law school or the greater Boston Community, anybody who’s reading [this], we are extraordinarily accessible and anonymous, so don’t be afraid to come forward,” she says.

BU CRP can be contacted at recovery@bu.edu. Readers can reach Megan directly at megancun@bu.edu.