David Rossman discusses the SJC’s recent ruling and the circumstances under which police may stop someone in the street. 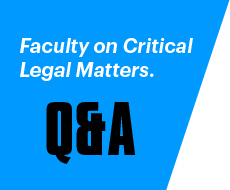 Last week, the Massachusetts Supreme Judicial Court handed down a unanimous opinion in Commonwealth v. Warren, in which the court recognized that black men in Boston often have legitimate reasons to avoid police officers and took this phenomenon into account in deciding how the police may exercise the stop and frisk power.

Boston University School of Law Professor and Director of the Criminal Law Clinical Programs David Rossman discusses the recent ruling and the circumstances under which police may stop someone in the street.

Q What was the legal issue in Warren?

A The legal issue in the case was whether the police had reasonable suspicion to stop Warren in the course of their investigation into a breaking and entering.

What standard did the court apply?

In Terry v. Ohio, 392 U.S. 1 (1968) the United States Supreme Court first announced the standard under which police officers may stop someone on the street and briefly detain him or her in order to investigate criminal activity. The police must have an objective basis for concluding that there is reasonable suspicion that the person has committed a crime, or will do so in the near future. While this standard is not a precise guide to police or to the community, it requires something more than just a hunch that illegal activity is afoot.

What were the facts in Warren?

The police received information from eyewitnesses that three black men had entered a home in the Roxbury section of Boston unlawfully, stolen items, and fled the scene in the early evening in December 2015. The description of the three men was very general. One was said to be wearing a red hoodie, another a black hoodie, and the third simply in dark clothing. About 30 minutes later, a Boston police officer who interviewed these witnesses was in his cruiser about a half mile away from the scene when he saw two black males in dark clothing, one with a hoodie. The officer asked to speak to the two, but they turned and started jogging into a park. Other officers came to the park and within seconds saw the two, and also asked to speak with them. One stood still and the other, Warren, turned and ran. An officer gave chase, shouted “Stop” and eventually apprehended Warren after a brief struggle. A search of the area where Warren was arrested revealed a Walther .22 caliber handgun and Warren was charged with unlawfully carrying a firearm.

How did the question of the relevance of Warren’s running from the police come before the court?

Prior to his trial, Warren moved the court to suppress as evidence the gun the police found on the grounds that the discovery of the gun was the fruit of an unlawful seizure. The trial court denied that motion, ruling that the police had reasonable suspicion to seize Warren at the time the second officer told him to stop. Warren was found guilty and his conviction was upheld by the Massachusetts Appeals Court. After granting a petition for further appellate review, the Massachusetts Supreme Judicial Court reversed the conviction.

What did the Supreme Judicial Court say about the legality of the police stop of Warren?

The court recognized that without considering the relevance of Warren’s running from the police, the information they had connecting him to any crime was far too general to support a conclusion that there was reasonable suspicion to believe he was one of the three men involved in the breaking and entering. The case came down to what weight the police and the courts should put on someone who runs from the police rather than stand around and cooperate. While recognizing that a suspect’s evasive conduct under some circumstances can be a relevant factor in the reasonable suspicion analysis, the court emphasized that flight alone is never sufficient. And, most significantly, the court stressed that where a black male runs away from the police in Boston, one must consider the past history of the Boston police in targeting young black men. The court recognized, in other words, that there may be quite legitimate reasons for young black men not to respond to a police request to answer questions but to run the other way.

On what did the Supreme Judicial Court rely to conclude that young black males have legitimate reasons to flee from Boston police?

The court buttressed its conclusion by relying on a study done by the Boston Police Department, that showed black men were disproportionately targeted for a Field Interrogation and Observation (FIO) report. An FIO is an encounter on the street between a police officer and a civilian significant enough that it generates information that the officer believes would supply data useful in combating crime. While blacks comprise less than 25 percent of the population of the City of Boston, 63 percent of those stopped for an FIO were black.

What did the Supreme Judicial Court say about the relevance of flight in the analysis of reasonable suspicion?

The court said: “the finding that black males in Boston are disproportionately and repeatedly targeted for FIO encounters suggests a reason for flight totally unrelated to consciousness of guilt. Such an individual, when approached by the police, might just as easily be motivated by the desire to avoid the recurring indignity of being racially profiled as by the desire to hide criminal activity. Given this reality for black males in the city of Boston, a judge should, in appropriate cases, consider the report’s findings in weighing flight as a factor in the reasonable suspicion calculus.

Has the United States Supreme Court said anything about this issue?

In Illinois v. Wardlow, 528 U.S. 119 (2000) the Court in a five-to-four opinion held that a suspect’s unprovoked flight on seeing a police car driving through his neighborhood, combined with the history of drug dealing in the area, gave police reasonable suspicion to make a stop. The majority opinion did not address the fact that the suspect was a black man in a black neighborhood, but the dissent did. Justice Stevens noted in dissent that racial profiling and widespread distrust between the black community and the police provides an entirely innocent explanation for why someone might flee and should not count in the analysis with the weight the majority was willing to give it.

What will change as a result of the decision in Warren?

It is very likely that Warren will change the behavior inside of a courthouse. Judges will give far less weight to the fact that a black male, or other minority member of the community who belongs to a group also disproportionately targeted by the police, fled. Police officers are also less likely to testify in ways that make a suspect’s flight the determinative factor in whether they had reasonable suspicion to justify a stop. Whether police will change their behavior on the street is something that is far harder to predict. Police officers have mixed motives in exercising their power to conduct street stops. Not every exercise of police power is subject to the sort of incentive created by opinions like Warren, which deal only with whether evidence will be suppressed in a criminal case. It takes more than a judicial opinion to change police culture. The Boston Police Department is aware of the problems that indiscriminate and disproportionate use of the stop power creates with the black community. In the years since 2008, FIO’s have decreased by over 40 percent. The leadership of the BPD is committed to even handed law enforcement. Time will tell.