Meet the Dean of BU School of Law 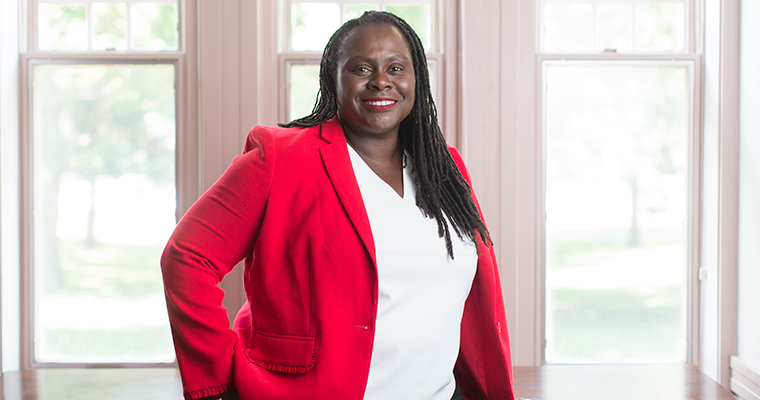 Advancing the School of Law Toward New Levels of Excellence.

Angela Onwuachi-Willig, a renowned legal scholar and expert in racial and gender inequality as well as civil rights law, was appointed dean of Boston University School of Law in August 2018.

Onwuachi-Willig writes in a variety of areas, including employment discrimination, family law, and critical race theory. She is author of According to Our Hearts: Rhinelander v. Rhinelander and the Law of the Multiracial Family (Yale 2013). Her articles have appeared in leading law journals such as the Yale Law Journal, California Law Review, Michigan Law Review, Georgetown Law Journal, Texas Law Review, UCLA Law Review, and Vanderbilt Law Review, to name a few.

Onwuachi-Willig is the recipient of numerous awards, including the Association of American Law Schools (AALS) Clyde Ferguson Award (2015), the AALS Derrick Bell Award (2006), and the Gertrude Rush Award (2016) from the Iowa Organization of Women Attorneys and the Iowa Chapter of the National Bar Association, and Law and Society’s John Hope Franklin, Jr. Prize (2018). Along with her co-author Mario Barnes, she is the first faculty member to win both the Ferguson and Bell Awards. In the 2017-2018 academic year, Onwuachi-Willig served as the William H. Neukom Fellows Research Chair in Diversity and Law at the American Bar Foundation.

Onwuachi-Willig received the 2016 Collegiate Teaching Award at the University of Iowa College of Law and the 2012 Marion Huit Award, a University of Iowa award given to a faculty member in recognition of outstanding teaching and assistance to students, exceptional research and writing, and dedicated service to the University and the surrounding community. Other honors include her selection as a finalist for the Supreme Court of Iowa in 2011; identification by the National Law Journal as one of the “Minority 40 under 40” in 2011 and by Lawyers of Color as one of the “50 Law Professors of Color Under 50” in its inaugural list in 2013; and election to the American Law Institute (ALI), American Bar Foundation (ABF), and Iowa Bar Foundation.

Onwuachi-Willig’s leadership roles include her service on the Grinnell College Alumni Council, including as president. She also served as the chair for AALS Committee on the Recruitment and Retention of Minority Law Teachers and Students for two years, leading the Committee as it drafted and developed an official Statement of Good Practices on the Recruitment and Retention of Minority Law Teachers. She also is the founder of the Lutie A. Lytle Black Women Law Faculty Workshop, which has resulted in the production of many books and hundreds of articles and essays by its participants and has assisted dozens of women on the path to tenure. Onwuachi-Willig also has served as the chair of the AALS Minority Groups Section, the AALS Law and Humanities Section, and the AALS Employment Discrimination Section and was chair of the 2015 AALS Mid-Year Workshop.

Onwuachi-Willig graduated from Grinnell College, Phi Beta Kappa, and received her JD from the University of Michigan, where she was a Clarence Darrow Scholar, a Michigan Law Review note editor, and an associate editor for the founding issue of the Michigan Journal of Race and Law. After law school, she clerked for U.S. District Court Judge Solomon Oliver of the Northern District of Ohio and US Sixth Circuit Judge Karen Nelson Moore. She received her PhD in sociology and African American studies from Yale University. She practiced law as a labor and employment associate at Jones Day in Cleveland, Ohio and Foley Hoag in Boston.