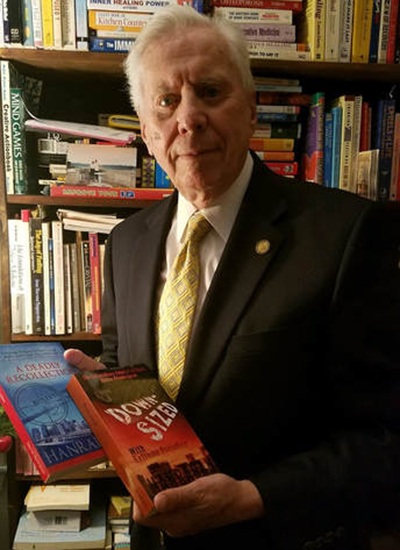 BOSTON (PRWEB)—Veteran trial attorney David Hanrahan (’66) released his latest novel, A Deadly Recollection, a brutally suspenseful and riveting foray into the connection between Boston organized crime, the syndicates of Brooklyn and the legal communities who try to keep them at bay.

Hanrahan continues to demonstrate his inherited Irish gift for story telling in his latest novel. After a beloved local bookie is found dead at a crash site, a hitman turns up dead in a cemetery near the Boston courthouse and a lawyer goes underground to protect his own neck. It’s not only a question of who did it, but why.

Bill Coine, a Massachusetts State Police Detective, is pulled in to investigate the seemingly unrelated crimes found within A Deadly Recollection, discovering along the way that the most obvious suspects aren’t necessarily the ones that make the most sense. What follows is a story impacted with intelligent twists and turns and a shockingly surprising ending.

Hanrahan is a former street-smart Brooklyn ‘guy’ himself and a Captain in a combat branch of the US Army. After leaving the service, Hanrahan attended and graduated from Boston University Law School (class of 1966) and dedicated himself to years as a Boston trial attorney. With his writing, he breathes unique life into his fictional characters and plots with a style only one who knows his world can bring about.

Purchase A Deadly Recollection by David Hanrahan online from Barnes & Noble, Amazon and at your local Independent bookstore.

For more information about A Deadly Recollection, visit www.davidhanrahan.com.

To obtain review copies or to book appearances, contact Wendie@SpotlightPublicityOnline.com