Conversations about Literature and Culture with Alicia Borinsky (Spring 2022)

Ana María Shua (April 1951) is an Argentine writer and screen writer. From flash fiction, poetry, and drama to novels, children’s literature, film scripts, short stories and other literature categories, her narratives have been read around the world.

Ivonne Aline Bordelois (born 5 November 1934), is an Argentine poet, essayist, and linguist. She graduated from the Faculty of Philosophy and Letters at the University of Buenos Aires, later studying literature and linguistics at the Sorbonne. She worked at the magazine Sur and conducted interviews and publications with Alejandra Pizarnik for various national and international publications.

Samantha Schweblin (Buenos Aires, 1978) studied image and sound, specializing in screenplay writing. She has been hailed as one of the greatest Argentinian short story writers of recent decades, and was shortlisted for the Man Booker International Prize in 2017 for her novel Distancia de rescate (Fever Dream, 2017), and longlisted in 2019 for her short-stories Pájaros en la boca (Mouthful of Birds) and for Kentukis (Little Eyes) in 2020. Her novel Distancia de rescate has been adapted into a film in 2021 by Netflix, directed by Claudia Llosa, and co-written with the author.

Journalist, cultural manager, and editor. He is currently the general director of Fundación El Libro, an institution that organizes the Buenos Aires International Book Fair. Between 2016 and 2020 he was director of Culture at the National Library of Argentina. With an extensive career in the media, he served as editor of the Culture section and the Ñ Magazine of the Clarín newspaper. He has collaborated in media in Latin America and Spain and has taught in different institutions and universities in his country. In addition, since 2010 he has chaired the Tomás Eloy Martínez Foundation.

Sponsored by the Center for Latin American Studies and by Voces Hispánicas/Hispanic Voices, an initiative of the Department of Romance Studies, Boston University. made possible by the generosity of Santander Universities, Global Division, whose activities form the keystone of the bank’s social action and maintain a stable alliance with more than 1200 universities in the Americas., Asia, and Europe. For more information, please visit www.santander.com/universities. 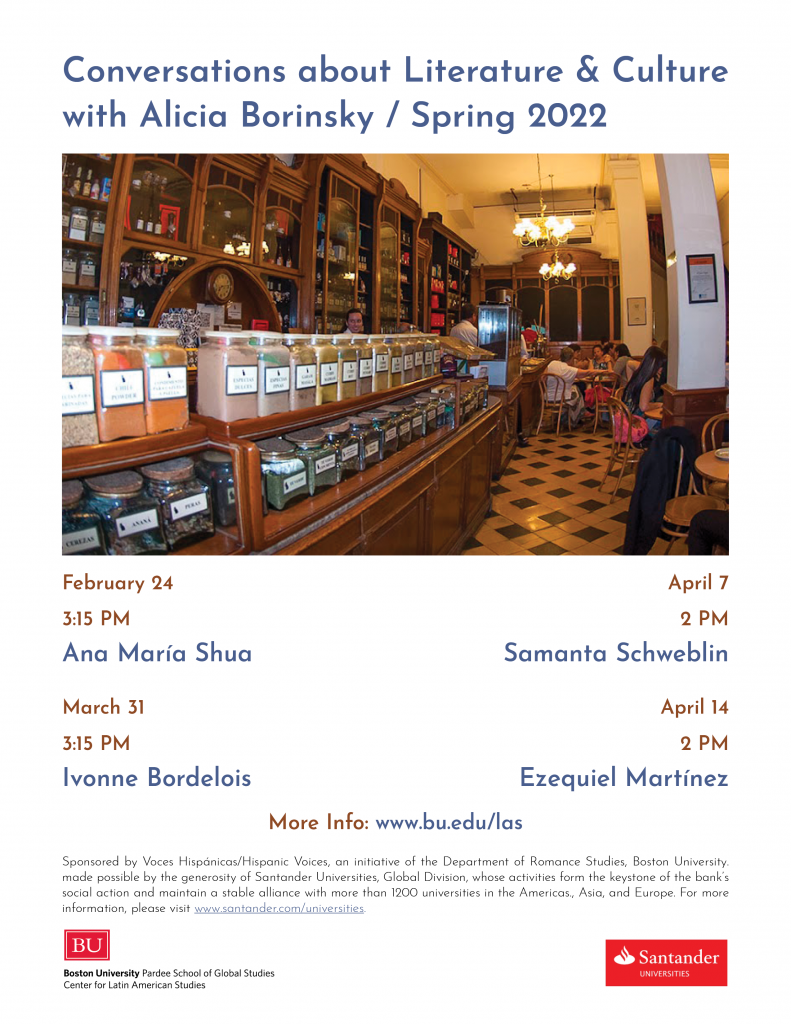