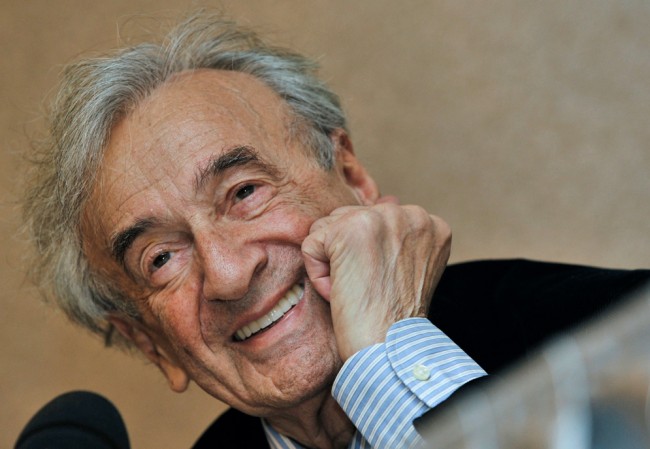 On the second day of the month of Sivan in the year 5776 (July 2, 2016), on a Sabbath, Elie Wiesel passed away in his Manhattan home. He was 87 years old. He is survived by his wife Marion, his son Elisha, a step-daughter, and two grandchildren. As colleagues and students of Elie Wiesel who taught at Boston University from 1976 until 2013, we are deeply saddened by his passing. We are also humbled by these many years of his regular presence on campus, his teaching and his friendship. This is a great loss for Boston University and the greater Boston area, where many felt they had a special connection to the author, speaker, and “witness to humanity” that he was.

The fact of his passing was transported around the world almost instantaneously, and one can read about his life and work in the many obituaries that have begun to appear. The world remembers him as a Holocaust survivor who felt compelled to bear witness and did so in exemplary ways. As Joseph Berger writes in the New York Times, Elie Wiesel filled a void; his memoire Night, appeared at a time when trauma and survivor’s guilt plagued the victims and denial silenced the perpetrators. As Michael Berenbaum notes in the Forward, Elie’s literary voice helped to transform victims into witnesses and allowed the children of perpretrators to confront the past.

With international recognition came visibility and greater responsibility. As a Nobel Laureate Elie Wiesel spoke out for Soviet Jewry and used his visibility to draw public attention to atrocities and human rights violations on every continent.

Elie Wiesel joined BU in 1976 where he served as the Andrew W. Mellon Professor in the Humanities and Professor of Philosophy and Religion. He retired from this position in 2013, a year after long-time BU President John Silber died who had brought him to BU. Elie gave his last public annual lectures in the fall of 2012, shortly after Silber’s death. During his time at BU, Elie Wiesel taught every fall, two courses on Literature and Memory. Only once in thirty five years of teaching did he teach a course on the Holocaust and he disliked it so much, he never tried again. Elie’s long-time assistant Martha Hauptman was the one who fielded student applications and vetted the teaching assistants. Taking a course with Elie Wiesel was the highlight of many students’ experience at Boston University. Students described their experience in his classroom in essays that were published in 2014 by the Elie Wiesel Center under the title Take a Teacher, Make a Friend: Students Write for Elie Wiesel. The contributors to this volume include a German Catholic theologian, a computer engineer and his daughter, a rabbi and a classics professor, a poet and a cantor, a professor of medicine and a speech pathologist, a professor of Italian literature and another rabbi, a theater director and a medievalist, a professor of constitutional law and a singer, a physicist/science editor and a thanatologist, a self-declared groupie and a scholar of Hasidism, two doctoral students (one from China) and another historian. This range speaks for itself.

At Boston University, Professor Wiesel held faculty positions in Religion and Philosophy and he lectured to the CAS Core Curriculum. But it is the title of Professor in the Humanities that indicates what his teaching was about. When the late John Silber brought Elie Wiesel to BU, he brought not just a prolific author but an eminently humane voice to Boston, to teach us and the wider community something about the humanities that required the special qualifications that he saw in Elie Wiesel.

Part of this legacy at BU is the Elie Wiesel Center for Jewish Studies. The fact that it exists is a testament to the friendship between Elie Wiesel and John Silber, who had been Boston University’s president for only five years when he persuaded Elie to join. Their friendship not only brought Wiesel to Boston, but kept him here for all these years, and it finally persuaded him to link his name indelibly with the University. Our task now is to live up to Elie’s legacy and follow his example of an existential commitment of the teacher to bearing witness, to bring to life the joy of Jewish text and tradition, and to make sure we remember the Holocaust, to speak for victims everywhere and don’t allow ourselves to be silenced. We are proud and humbled to have known Elie Wiesel as a colleague and friend. May his memory be for a blessing!