On December 1, 2020, the US District Court struck down the Department of Homeland Security (DHS) and Department of Labor (DOL) interim final rules. The DOL rule, effective October 8, 2020, modified the calculations to raise the minimum prevailing wages for employment-based nonimmigrant and immigrant petitions while the DHS rule, slated to go into effect on December 7, 2020, increased the regulatory requirements for qualification in the H-1B specialty workers and sought to implement other restrictions to the H-1B program.

The litigation was filed in the Northern District of California lawsuit, Chamber of Commerce v. DHS, in which BU joined other academic and research institutions in filing an amicus brief last month. The order grants the plaintiff’s motion for partial summary judgment and sets aside both the DOL and DHS interim final rules, thus blocking both rules from being enforced or implemented. The basis for the Court’s order is that both DOL and DHS “failed to show there was good cause to dispense with the rational and thoughtful discourse that is provide by the APA’s notice and comment requirements.” The Court also noted that, given that the DHS rule was under consideration as early as 2017, the Government could not claim that the COVID-19 pandemic was sufficient to document ‘good cause’ due to their delay in issuing the final rules after the start of the pandemic.

This is a vital first step to mitigate the harmful nature of these rules as it delays implementation but there will need to be further regulatory rulemaking required to officially nullify the rules moving forward. DOL has announced that they will update their systems to revert back to the wages prior to rule change in the next few days. The ISSO will continue to work with individual hiring departments to strategize H-1 sponsorship for eligible BU positions.

See more details about both rules below:

Each rule has varying effective dates and comment periods but both rules have been published as interim final and will be effective on the dates outlined in each the rule. It is expected that there will be numerous court challenges to both given they did not follow standard federal rule making process. However, departments seeking to initiate new or extended H-1 sponsorship should expect processing delays and potential increased eligibility and wage requirements.

Interim final rule effective December 7, 2020 with concurrent 60-day comment period for the rule portion and 30 days for the forms portion.

DHS has explained that these changes are intended to realize program efficiencies and better ensure that each H-1B nonimmigrant will be working for a qualified employer in a job that meets the statutory definition of a “specialty occupation.” DHS asserts these changes are necessary to strengthen the integrity of the H-1B program during the economic crisis caused by the COVID-19 public health emergency to more effectively ensure that the employment of H-1B workers will not have an adverse impact on the wages and working conditions of similarly employed U.S. workers.

Strengthening Wage Protections for the Temporary and Permanent Employment of Certain

The Department of Labor is amending Employment and Training Administration (ETA) regulations governing the prevailing wages for foreign workers on a temporary basis through H-1B, H-1B1, or E-3 nonimmigrant visas and, on a permanent basis, through employment-based immigrant visas. DOL is amending regulations governing permanent labor certifications and Labor Condition Applications (LCAs) to incorporate changes to the computation of wage levels under the Department’s four-tiered wage structure based on the Occupational Employment Statistics (OES) wage survey administered by the Bureau of Labor Statistics (BLS). DOL asserts that these changes will update the computation of prevailing wage levels under the existing four-tier wage structure to better reflect the actual wages earned by U.S. workers and to allow them to more effectively ensure that the employment of immigrant and nonimmigrant workers do not adversely affect the wages and job opportunities of U.S. workers.

Office of the University Registrar 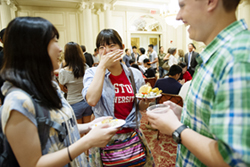 Riho Imada (from left) and Akari Noguchi, both students at the Center for English Language and Orientation Programs, and Andrew Burwash (CAS'18) at the International Student Reception, held September 4 at the Trustee Ballroom. Photo by Jackie Riccardi