IPR Blog: The “Silence” and “Resilience” in Suffering

Participants in the IPR seminar have been sharing posts following lectures.  From time to time we’ll also be sharing their thoughts with the broader IPR audience on this blog.  Prof. Harold Schweizer’s lecture on “The Poetry of Waiting and Suffering” (Sept. 18) drew a number of thoughtful reactions, including those of Ron Bernier and Elizabeth Stern, who are this week’s featured bloggers.  Some excerpts below…

–Ron Bernier writes:  “I found much to admire and think further on in Dr. Schweizer’s talk, “The Poetry of Suffering and Waiting.”  In particular I was struck by the consistency of the theme of the “silence” and “indecipherability” of sufferering – that the langauge of suffering, for both the afflicted in his/her solitude in pain and the “waiting” of he/she/we who attend on them is nameless or “unsayable.”  This put me in mind of the theology and philosophy of apophasis – a form of discouse that fundamentally consists of langage that negates itself in order to evoke that which is beyond words, beyond the limits of saying altogether.  “‘Apophasis’ reads etymologically,” explains William Franke (professor of comparative literature and religious studies at Vanderbilt University; see his On What Cannot Be Said, Notre Dame, 2007), “as ‘away from speech’ or ‘saying away’ (apo, ‘from’ or ‘away from’; phasis, ‘assertion,’ from phemi, ‘assert’ or ‘say’), and this points in the direction of unsaying and ultimately of silence” (Franke, vol 1, 2).  Apophasis is fostered by a notion fundamentally opposed to the central tenet of classical Greek philosophy of Being (or ontology) and its claims for autonomous human reason; it articulates, as it were, the utter inefficiency of the Logos to name ultimate reality.  This prompts me to think more about the very possibility of the apophatic body – that is, beyond a matter of the inadequacy of linguistic communication, to what extent can we, as waiting attendant to the sufferer, enter into another type of communication with the apophatic material body.  My worry, however, is about too radical a separation between us and the creaturely reality of the sufferer.  What happens in the space where, in the waiting and silence, purpose or interest or intention (Schweizer’s remarks on Kant) is suspended.  Does this smack too much of indifference – and so, ethically, of quietism – in the face of the needs and suffering of an embodied life?”

–Elizabeth Stern writes:  “I found Schweizer’s overwhelming focus on defining suffering as synonymous with death in a very absolute way challenging. While suffering in life is unavoidable and it is true that some art arises out of the consciousness of unhappiness, I believe that encapsulating suffering in primarily a negative spectrum without also examining the human capacity for resilience, hope, and to endure discourages a full understanding and appreciation of the relationship of suffering to art. It also denies us the ability to witness all of human experience by inhibiting us from internalizing that a peace and gentle grace also exist in the stillness of death.  I also found the importance of discarding labels (eg. Not viewing the sufferer as “a specimen from the social category labeled ‘unfortunate’ “) particularly prudent. Withholding definition enables us to suspend judgment and to witness the sufferer as a human being in a space of openness and presence, to “enter her time” and to allow her, as in the case of Arthur Kleinman’s young burn patient, to show up as she is. When we facilitate this connection, we create a space for healing to begin and for a moment, we dissipate the solitude and silence that often mark the sufferer’s experience of suffering.”

Welcome to the IPR’s New Blog

Join us in this space for blogs and updates about this year's series and other Institute for Philosophy and Religion news... Coming soon:  blog posts on our most recent lectures...

Photos from Our 40th Anniversary 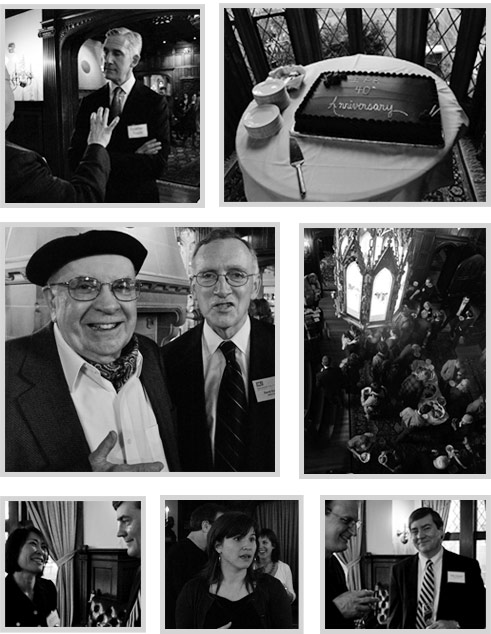 Top row:
Left: Jonathan Rouner, son of longtime IPR Director Leroy Rouner, joined us for a tribute to his father's work in the institute.
Right: The 40th anniversary cake.

John P. McCormick is a professor of political science at the University of Chicago. His research and teaching interests include political thought in Renaissance Florence (specifically, Guicciardini and Machiavelli), 19th- and 20th-century continental political and social theory (with a focus on Weimar Germany and Central European emigres to the U.S.), the philosophy and sociology of law, the normative dimensions of European integration, and contemporary democratic theory. He is the author of Carl Schmitt's Critique of Liberalism: Against Politics as Technology (Cambridge, 1997) and Weber, Habermas and Transformations of the European State: Constitutional, Social and Supranational Democracy (Cambridge, 2006). His latest work is Machiavellian Democracy (Cambridge, 2011).

Supported by the Boston University Center for the Humanities and cosponsored by the Elie Wiesel Center for Judaic Studies.

Professor Jan Assmann taught Egyptology at Heidelberg University from 1992 until 2003 and has been Honorary Professor of Cultural and Religious Studies at Constance University since 2005. His wide-ranging work explores ancient Egyptian religion, literature and history, cultural theory and memory, the reception of Egypt in Europe, and historical anthropology. He has taught as a visiting professor in Paris, Jerusalem, and several American universities including Rice, Yale, and Chicago. His books in English include Moses the Egyptian (1997), The Search for God in Ancient Egypt (2002), Death and Salvation in Ancient Egypt (2006), and The Price of Monotheism (2009).

Robert D. Putnam is Malkin Professor of Public Policy at Harvard University. He was the 2006 recipient of the Skytte Prize and has served as an adviser to presidents and national leaders around the world. He has written more than a dozen books, including Bowling Alone and Making Democracy Work, both among the most-cited publications in the social sciences in the last half century. The London Sunday Times has called him "the most influential academic in the world today." Putnam's most recent book, American Grace, co-authored with David Campbell of Notre Dame, focuses on the role of religion in American public life. Based on data from two of the most comprehensive national surveys on religion and civic engagement ever conducted, American Grace is the winner of the American Political Science Association's 2011 Woodrow Wilson Foundation Award for the best book on government, politics, or international affairs.

Jurgen Habermas is indisputably the most consequential social theorist of postwar Germany. Trained in the traditions of Western Marxism and post-Kantian German Idealism, he is known chiefly for his tireless work in theorizing the philosophical foundations for rational discourse in modern democratic society. In his most recent writings, to the surprise of many observers, he has begun to appreciate the considerable contribution of religious discourse, and he has developed the rudiments of a theory according to which religious participants in modern democratic polities should be permitted to participate in public debate, provided they engage in the cooperative effort of "translating" their religious insights into terms that are intelligible to any and all participants in the public sphere. This theory has developed against the background of serious legal and political controversies in Germany, controversies that concern both the historical legacy of Christianity and the new presence of Islam. Professor Gordon will address the political context of Habermas's theory, and he will explore the ways that Habermas's theory both engages but also modifies major theories of secularization that have played a prominent role in postwar German social thought.

Peter E. Gordon is the Amabel B. James Professor of History at Harvard University, and specializes in modern European intellectual history from the late-eighteenth to the late-twentieth century.

“On Being a Mediocre Believer in an Age of Extremities,” Charles Mathewes (Department of Religion, University of Virginia)

Professor Mathewes's research and teaching are broadly in the areas of Christian thought, comparative religious ethics, and religion, culture, and politics. He has recently written A Theology of Public Life During the World (Cambridge, 2008), on religion's role in public life in pluralistic democracies, and Understanding Religious Ethics (Wiley, 2010), the first undergraduate textbook that attempts to compare Jewish, Christian, and Islamic ethics, in the context of a variety of contested moral issues. Together with two of his graduate students he is currently completing a four-volume Major Works collection for Routledge Publishers on Comparative Religious Ethics, and he is working on a project exploring the nature of the challenges to religiously and morally sound life in our age, across several traditions.

Supported by the Boston University Center for the Humanities and cosponsored by the Elie Wiesel Center for Judaic Studies.

Abstract: Hermann Cohen's virulent criticism of Spinoza's Theologico-Political Treatise always remained for Leo Strauss a puzzling issue. Interestingly enough, however, Strauss never mentioned, in his many studies on the subject, an early article of Cohen, in which Spinoza fulfills a central role: "Heinrich Heine and Judaism" (1867). In that early article, Cohen had displayed a strong enthusiasm for Spinoza, who according to him had remained a Jew throughout his life, even after the "herem." Most often, the article is disregarded by commentators, in particular, Franz Rosenzweig, who deemed it a "sin": the "Spinozian sin" of Cohen's younger years. Professor Bienenstock's contention is that trying to interpret the late criticism without taking into account the early enthusiasm condemns us not to understand Cohen's rage and its causes, as well as Cohen's aims. In this lecture, she will explain what Rosenzweig saw as a "sin," and why Rosenzweig did not agree with Spinoza, nor with Cohen.

Myriam Bienenstock is professor and chair of philosophy at the University Francois Rabelais at Tours, France. She has published widely on German and Jewish philosophy and on authors ranging from Kant, Herder, Fichte, Schelling, and Hegel to Rosenzweig and Levinas. At present, she is working on a book to be titled Hermann Cohen and Franz Rosenzweig: A Debate on German Thought.

In this paper, Gillespie builds on his argument in The Theological Origins of Modernity, arguing that liberalism is not only not irreligious but is founded on an Antitrinitarian interpretation of scripture developed first by Michael Servetus and then developed in Transylvania and Poland before being carried by refugees from religious persecution to Holland, Britain, and America where it came to serve as the backbone of liberal thought.

Michael Gillespie (PhD, University of Chicago) is the Jerry G. and Patricia Crawford Hubbard Professor of Political Science at Duke University, and the author of The Theological Origins of Modernity. He is also co-editor of Nietzsche's New Seas: Explorations in Philosophy, Aesthetics, and Politics, and Ratifying the Constitution, and has published articles on Montaigne, Hegel, Nietzsche, Heidegger, and various topics in American political thought, as well as on the relation of religion and politics. He is currently completing a book entitled Nietzsche's Final Teaching. Professor Gillespie is the Director of the Gerst Program in Political, Economic, and Humanistic Studies. He has received grants from the National Endowment for the Humanities, the German Academic Exchange Service, the Templeton Foundation, the Liberty Fund, and the Earhart Foundation. This event is free and open to the public.