In October of 2014, the Initiative on Cities released a ground-breaking survey of American Mayors, which has since been dedicated as the annual Menino Survey of Mayors. Based on interviews with over seventy mayors from cities with over 1 million to those with as few as 50,000 residents, it offers the first-ever nationally representative review of mayoral priorities. 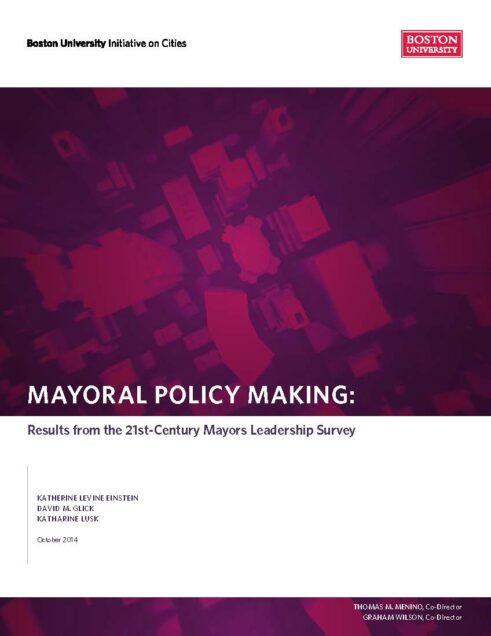 Initiated in June 2014 at the bi-annual US Conference of Mayors, the project was designed to gain insight into the current policy priorities, challenges and planned political capital expenditures of sitting mayors, as well as sources of influence and inspiration. A team of Boston University researchers, including Katherine Levine Einstein and David Glick, both Assistant Professors of Political Science, and Katharine Lusk, the Executive Director of the Initiative on Cities, interviewed mayors in person, via phone and through an online survey over the course of two months.

The results are compelling. The summary report, Mayoral Policy-Making: Results from the 21st Century Mayors Survey, sheds light on the hurdles and opportunities facing not just individual elected officials but urbanized America more broadly. It highlights the importance mayors place on the physical, fiscal and social infrastructure of their cities, and – contrary to prior research – suggests that party affiliation has a significant influence on mayoral priority-setting.

View the full report via the following link: