The inaugural IOC Urban Seminar, The Open City, examined a key question facing urban communities: How can cities take the massive influx of raw data, turn it into knowledge, and turn that knowledge into a better city? 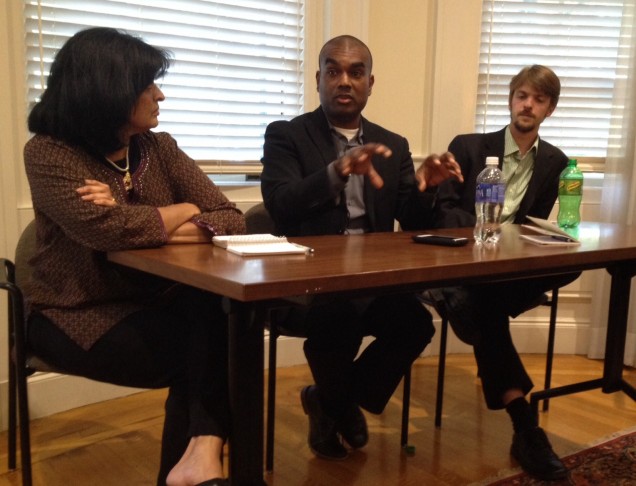 Speakers from Boston University, Northeastern University and the City of Boston, explored the ways in which big data can be leveraged to improve the very communities from which it originates. Sucharita Gopal (Professor of Earth & Environment, BU),  Nigel Jacob (Executive in Residence at Boston University; Co-Founder, New Urban Mechanics), and Dan O’Brien (Director of Research at the Boston Area Research Initiative and Assistant Professor at Northeastern), participated in a moderated discussion led by Seminar Co-Chair Nathan Philips.

WHY: The Benefits of Big Data

The discussion began with a reminder that big data, when analyzed and acted on, has the power to positively transform people’s lives. Increased government transparency, new gauges of constituent concern, and real-time learning on the effectiveness of policies and programs were highlighted as some of the key benefits associated with this brave new world.

Public Engagement: Jacob noted that one of the most significant benefits of a tool like Citizens Connect is that it harnesses and amplifies the voices of urban constituents, and provides government officials with a lens through which to understand the needs and engagement of neighborhoods. Via the app, managed by the City of Boston, residents are able to report issues such as graffiti, uncollected trash or broken street lights, which in turn become work orders for city staff. The aggregated, constituent generated data affords an opportunity to measure rates of relative “custodianship” by neighborhood or even individual user. IOC Co-Director Tom Menino also spoke to the opportunity government leaders have to leverage resident reported data on problem properties, poor roadways, or dated or damaged playgrounds in order to guide the capital planning process. With the right systems and leadership infrastructure, big data can thus inform both the quick fixes and patches needed today, and the long-term transformations necessary to make a city safer and more livable.

Real-Time Learning Over Time: The beneficiaries of big data may be policymakers and the communities themselves – both the governors and the governed. As O’Brien noted, communities, when enabled with the right tools and partners, may choose to use big data to observe their internal dynamics. He cited one neighborhood that examined community center use before and after a shooting, to understand their own needs and better “see themselves” in the aftermath of tragedy. Professor Gopal also highlighted the ways in which real-time data have enabled the academic community to have a real-world impact. Available data sets were once static and dated, so academics were better equipped to analyze the past but not the present. But with the torrent of data and the need for collaborators to help evaluate and synthesize it, academics can use their skills and resources to provide immediate value to communities. Professor O’Brien referenced an experiment his students conducted around community engagement in Boston, gauging whether a city (“Clean up Boston”) or neighborhood (“Clean up Dudley Square”) message on community flyers impacted resident behavior. And because big data is so often longitudinal, the effects of policies and programs can be tracked over time.

Transparency: Jacob and Menino both spoke to a very different aspect of the “open city.” They highlighted the important role that mass channels of communication played in the aftermath of the marathon bombing. In this instance an “open city” was one which operated under the principle of transparency, ensuring that residents were aware of official channels and kept abreast of the latest news. Frequency, honest communication from trusted elected officials helped to minimize and mitigate the risk of mob rule, which was taking hold in social media channels. As O’Brien noted, “the crowd-sourced city is important, but there is a critical need for leadership”, which in this case was responsible for sifting through the massive volume of leads, providing the public with a reliable source of information and, thereby, maintaining calm and order.

HOW: The Hurdles of Operationalizing Big Data

All three speakers highlighted a number of challenges and pitfalls associated with big data, most notably the importance of protecting privacy, the challenges of data integrity and the difficulty managing the sheer volume of information and data. As Jacob noted, “the hand to hand combat of getting the work done is really hard.”

Privacy: Gopal referenced how important it is for the owners and governors of big data to protect the privacy of individual citizens, even if these same residents are cavalier about the information they share. As an example, Professor Phillips related that states like California are operating without a regulatory framework governing whether private firms may capture publically available information about individuals, such as license plates. Jacob reiterated that there is no framework for deciding what data may be “open” at the city level. But because cities have so many views of individual residents, which are not currently integrated, there is little risk that they share a consolidated view of an individual citizen. All agreed that government and academic institutions are interested in acting in the best interests of those they serve, but are essentially operating in a new frontier ungoverned by codified regulation.

Data integrity: As Gopal noted “my fear is that a map looks like the truth, but is it really honest?” Jacob concurred, expressing the challenge he has with releasing city data, which “people look to as the canonical source.” Some sources of data, particularly those which are user-generated, have inherent bias. One study, authored by O’Brien, evaluated resident reports generated via Citizens Connect. It revealed that users were more likely to be young and live in neighborhoods with high rates of renters. Another study which evaluated the entire constituent reporting system – including reports provided via the online application and the city’s toll free hotline – determined that low income residents were less likely to report problems to the city. These biases suggests that user generated data, by itself, provides an insufficient snapshot of resident needs and urban conditions, and must be complemented by other sources of information, whether community meetings, resident or government employee surveys, and visual evaluations.

Volume: O’Brien highlighted the significant challenge communities face in trying to manage and make use of the “exhaust pipe of data”, a point reinforced when Jacob referred to the 165,000 resident reports Boston received last year. Governments are already repositories for immense amounts of passively provided data, from resident water usage to mass transit trips. But they also have the unique capacity to actively generate and gather additional data – either by creating new channels for citizen engagement (E.g. Citizens Connect or 311 systems) or by mandating that new data streams be shared with the city (E.g. Data reporting ordinances).

The conversation yielded two key insights into the ways in which cities can effectively leverage data for the greater good:

1)      Leadership: Leadership is critical, both because it enables appropriate priority-setting – which data do cities pay attention to and when? – and because it can ensure the necessary safeguards are in place to protect the rights of individuals. Elected officials and civil servants ultimately serve the public and are tasked with acting in their best interest. When confronted with as yet unregulated arenas, such as big data, these leaders are the critical arbiters in the opening of “open data”.

2)      Infrastructure: Cities need the infrastructure to act on big data. In this case infrastructure encompasses everything from skilled analysts able to crunch the numbers to the use of data in decision-making to the software and hardware assets necessary to house it. It is also critical that a city’s residents themselves are viewed as a critical human resource – by contributing data and having a stake in its proper use they are key collaborators and an inherent part of big data infrastructure. Absent any one of these elements, cities will be challenged to realize the full potential of big data.