Food culture is changing how we experience and interact with cities. How are cities innovating to solve food-related challenges? Does food culture impact all neighborhoods equally? And where does Boston stack up? 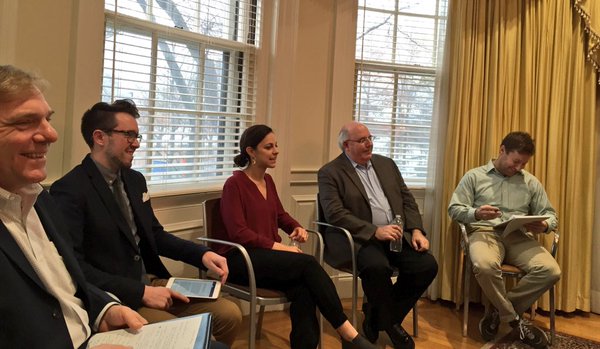 The panel’s conversation focused largely on the history and current state of food in Boston. Leibowitz noted that the city has a long history of innovative food policy, from the Roslindale Village Farmer’s Market in the 1980s to the thriving Boston Public Market today.

Cities around the country have begun to view food policy as a platform for wide impact, an opportunity to unite health initiatives, community development, and job creation, all while promoting cultural vibrancy. Recent trends in the food industry, such as restaurant incubators and food trucks, have been instrumental in creating new jobs and expanding opportunities for access. Hubbard’s Restaurant Entrepreneurship Institute hopes to support such efforts, kickstarting new businesses in Boston. Meanwhile, food trucks have added a new dimension to the city’s food scene, one that brings people out into the streets. Fitzmaurice noted the importance of considering the built environment’s relationship to food trucks – cities must be cognizant of the public assets near which food trucks are located (like fountains, courtyards, and parks), where customers can sit, and where trash can go.

Equity emerged as another key theme during the discussion. To improve access to healthy and affordable foods, Boston has been pushing to bring more grocery stores into under-served communities. Leibowitz noted, however, that adding grocery stores to these “food deserts” has proven to be supportive, but not sufficient – other programs like farmers markets and a vibrant restaurant industry are critical to improving food access, and the city can play an important role. When Boston began allowing fresh fish to be sold at farmers markets, it ensured that fish would be available in low-income communities as well. Despite initial doubts from some, fishmongers enjoyed strong sales in these neighborhoods.

The panel identified other challenges in Boston’s food industry. Tough permitting requirements and a scarcity of available liquor licenses stood as two big obstacles for food entrepreneurs that could be mitigated with help from municipal officials. Boston’s limited amount of land was noted as a problem for urban farmers, and one that may be more difficult to overcome.

Boston has seen significant changes in its food landscape in recent decades, exemplified by the booming restaurant industry in the South End, Effron explained. Food will continue to play a role in the city’s culture, and Boston’s experience provides some lessons to other cities interested in the past, present, and future of urban food policy.