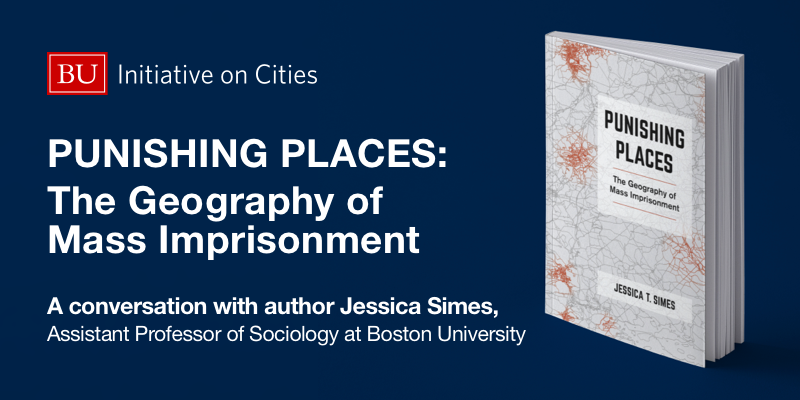 Join us for a conversation with Jessica Simes, Assistant Professor of Sociology, regarding her new book Punishing Places: The Geography of Mass Imprisonment (October 2021, University of California Press).

Simes’s book describes in unprecedented detail the consequences of mass incarceration for neighborhoods and communities in the United States.

Punishing Places applies a unique spatial analysis to mass incarceration in the United States. It demonstrates that our highest imprisonment rates are now in small cities, suburbs, and rural areas. Jessica Simes argues that mass incarceration should be conceptualized as one of the legacies of U.S. racial residential segregation, but that a focus on large cities has diverted vital scholarly and policy attention away from communities affected most by mass incarceration today. This book presents novel measures for estimating the community-level effects of incarceration using spatial, quantitative, and qualitative methods. This analysis has broad and urgent implications for policy reforms aimed at ameliorating the community effects of mass incarceration and promoting alternatives to the carceral system.

This event is part of a series on Race, Place, and Space, co-hosted by the IOC, the BU Arts Initiative, and BU Diversity & Inclusion (D&I). The series explores the ways in which racial and ethnic groups access, inhabit, occupy, shape, and are memorialized in urban contexts—as well as the ways their contemporary and historical contributions have been made invisible, disregarded, or denigrated.