#BUandBoston: Hearts for the Homeless Helps the Most Vulnerable 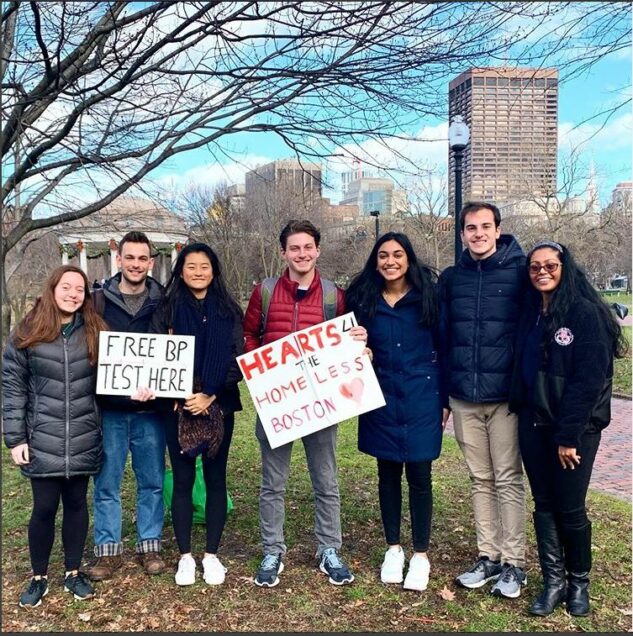 The Westside of Syracuse is one of the poorest neighborhoods in the nation. Seventy-five percent of the population is uninsured or on Medicare or Medicaid, compared to between forty and fifty percent nationally. When Timothy Willard came to BU, he majored in pre-med so that he could go back and open a free clinic. He soon shifted his focus to public health.

In Willard’s view, medicine focuses on healing diseases while public health works to prevent them. “I learned that I could make a bigger difference in people’s lives (particularly people who can’t afford to go to the doctor) if I worked towards preventing disease instead of treating it,” he said.

A year ago, that dream began to become a reality. While he was working out at Fitrec, he saw a post asking if anyone wanted to start a Boston area chapter of Hearts for the Homeless (H4H). H4H is an international organization that three Biomedical students at the University of Central Florida founded in 2016. Mary Cobty, an H4h spokesperson, said that they make “it possible for these students to help their homeless communities improve their heart health through blood pressure screening opportunities.” They have led service trips around the world, from “India to Brazil to Boston to Orlando to Austin to Dayton.”

Willard, along with fellow students Carlo Taglietti, Yujia Zuo, and Ben Suffin, spent the summer of 2019 organizing the new club and drafting its constitution. The national chapter provided them with equipment, while Zuo helped build their presence online. They found community partners who were willing to work with them. According to Willard, “the four of us have been close friends since freshman year and this organization was how we wanted to serve the city of Boston which served us in so many ways.”

Last fall, they held their first monthly meeting, collecting dues and training volunteers. They teach their members how to keep patients comfortable throughout the process. Two members of the club’s leadership go to every event to ensure that volunteers follow protocol.

Soon after, they began doing regular service trips to the St. Francis House, a facility near Boston Commons that serves those experiencing homelessness. There, the students set up their equipment in the back of a room where residents are watching a movie. As the morning wears on, residents trickle back to have their blood pressure checked. It is, in Willard’s words, “a pretty fun time.”

Recently, H4H has been helping the guests at the Saint Francis House weather the impact of COVID-19. They made care packages that included soap, water, and safety information, set-up a GoFundMe, and raised $1,825 for the shelter’s emergency fund.

As Willard notes, one blood pressure screening will not save anybody’s life, but it may prompt someone to pay more attention to their health. Regular screening can help people see how their lifestyle choices impact their health. If they start visiting the clinic, taking medication regularly, smoking less, and sleeping more, they can dramatically improve their cardiovascular health.

This post is part of our #BUandBoston series, highlighting the work and research of BU students, faculty, and staff throughout the City of Boston. Interested in having your Boston-related work featured? Tag us on Instagram or Twitter @BUonCities using the #BUandBoston or send us an email at ioc@bu.edu.

COVID-19 & Cities: Pollution and the Environment